I’ve been doing a lot of reading, but not a lot of blogging, while in lockdown. In an effort to catch up on my outstanding reviews, I’m introducing Quarantine Reads! Check out mini reviews of three books I read during lockdown that I never got to share my thoughts on.

I received a copy of this book from the author in exchange for an honest review.

Zen Cho returns with a found family wuxia fantasy that combines the vibrancy of old school martial arts movies with characters drawn from the margins of history.

A bandit walks into a coffeehouse, and it all goes downhill from there. Guet Imm, a young votary of the Order of the Pure Moon, joins up with an eclectic group of thieves (whether they like it or not) in order to protect a sacred object, and finds herself in a far more complicated situation than she could have ever imagined.

This novella is an absolute delight! Although I am not familiar with Wuxia as a genre or style, I absolutely adored this short, impactful, and fun book. This book will hit a lot of sweet spots for readers, including the found family trope and wonderfully written LGBTQ+ characters, and it should absolutely be on your radar if you are a fantasy reader!

The Order of the Pure Moon Reflected in Water is more than just a pretty cover. Cho has a wonderful knack for writing sharp dialogue and witty banter, as well as creating complex and lovable characters that have the most wonderful chemistry together. I’d highly recommend this one if you’re looking for some novellas to add to your TBR.

The Bone Witch by Rin Chupeco

In the captivating start to a new, darkly lyrical fantasy series, Tea can raise the dead, but resurrection comes at a price.When Tea accidentally resurrects her brother from the dead, she learns she is different from the other witches in her family. Her gift for necromancy means that she’s a bone witch, a title that makes her feared and ostracized by her community. But Tea finds solace and guidance with an older, wiser bone witch, who takes Tea and her brother to another land for training.In her new home, Tea puts all her energy into becoming an asha-one who can wield elemental magic. But dark forces are approaching quickly, and in the face of danger, Tea will have to overcome her obstacles and make a powerful choice.

The Bone Witch was an audiobook listen early on in lockdown, and while I enjoyed it I think it will be best to judge this series as a whole rather than on this first book for a few reasons.

This book felt a little generic to me, but showed potential to be a great YA fantasy serioes. It shows both the past and present for Tea — both her discovering her power as a youth and her exile in the present day. I much preferred the small bits of her present situation more than her past — I just didn’t find young Tea to be a particularly interesting character. She follows the same beats as many YA heroines learning how to control her rare and special magic, and I feel like this kind of story has gotten a little stale for me personally.

However, Tea’s mysterious exile and what she’s doing absolutely hooked me and is the reason I’d be up for continuing the series. She’s obviously been jaded and angered by something that happened in her past, and I think that this storyline will be the make or break the series for me. This is where I see a lot of promise for the series! 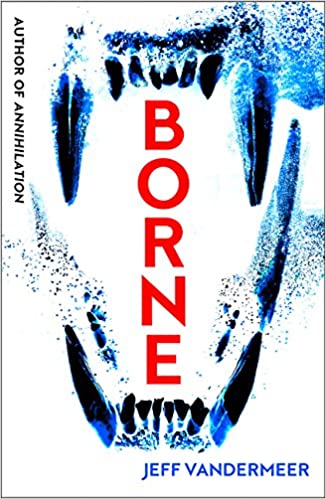 In a ruined, nameless city of the future, a woman named Rachel, who makes her living as a scavenger, finds a creature she names “Borne” entangled in the fur of Mord, a gigantic, despotic bear. Mord once prowled the corridors of the biotech organization known as the Company, which lies at the outskirts of the city, until he was experimented on, grew large, learned to fly and broke free. Driven insane by his torture at the Company, Mord terrorizes the city even as he provides sustenance for scavengers like Rachel.

At first, Borne looks like nothing at all—just a green lump that might be a Company discard. The Company, although severely damaged, is rumoured to still make creatures and send them to distant places that have not yet suffered Collapse.

Borne somehow reminds Rachel of the island nation of her birth, now long lost to rising seas. She feels an attachment she resents; attachments are traps, and in this world any weakness can kill you. Yet when she takes Borne to her subterranean sanctuary, the Balcony Cliffs, Rachel convinces her lover, Wick, not to render Borne down to raw genetic material for the drugs he sells—she cannot break that bond.

Wick is a special kind of supplier, because the drug dealers in the city don’t sell the usual things. They sell tiny creatures that can be swallowed or stuck in the ear, and that release powerful memories of other people’s happier times or pull out forgotten memories from the user’s own mind—or just produce beautiful visions that provide escape from the barren, craterous landscapes of the city.

Against his better judgment, out of affection for Rachel or perhaps some other impulse, Wick respects her decision. Rachel, meanwhile, despite her loyalty to Wick, knows he has kept secrets from her. Searching his apartment, she finds a burnt, unreadable journal titled “Mord,” a cryptic reference to the Magician (a rival drug dealer) and evidence that Wick has planned the layout of the Balcony Cliffs to match the blueprint of the Company building. What is he hiding? Why won’t he tell her about what happened when he worked for the Company?

Isn’t that just the longest book summary you’ve ever read? I was initially very nervous about picking up Borne, despite the good reviews I had seen, because I had some trouble with VanderMeer’s best known work, Annihilation. However, I started the audiobook on a whim and ended up enjoying it!

Borne is much more accessible than Annihilation was, but still has the signature ‘weird’ factor that VanderMeer’s books seem to have. It is extremely well-written and not in the strange, lyrical style that I had so much trouble with. Although there isn’t much of a plot, Borne is a pretty easy science fiction/post apocalyptic read. I really loved the world that the book is set in — the imagery is so incredibly strong and he does a great job of setting up the desperation and devastation of the people living in the city. It is bizarre and wonderful and I could read many more books set in this world.

While the world building is the book’s strongest point, I just didn’t connect strongly with most of the characters. Rachael, our narrator, is a fine protagonist and I enjoyed her point of view, but she isn’t really someone who sticks in my mind. Wick, her partner, is similar — interesting enough while you’re reading the book, but doesn’t make a lasting impression. Borne himself, however, is absolutely marvelous. I think this is due in part to the audiobook narrator’s voicing of the character, she totally brought him to life. Sweet and innocent, but also kind of terrifying, Borne himself was a delight.

I really enjoyed this one and am planning to move onto the second book, Dead Astronauts soon!

Want to pick up a copy of these books? You can find them at Book Depository and Blackwells (affiliate links).

3 thoughts on “Quarantine Reads: The Order of the Pure Moon Reflected in Water, The Bone Witch, and Borne”