Bookish and the Beast by Ashley Poston

I was provided a copy of this book by the publisher in exchange for an honest review. This review is spoiler-free.

What an absolutely delightful book! Despite the fact that I am not much of a contemporary YA reader, I knew that I would enjoy Bookish and the Beast. I adore Poston’s Once Upon a Con series — and you can see my reviews for Geekerella and The Princess and the Fangirl here — and my high expectations for this story were absolutely met. 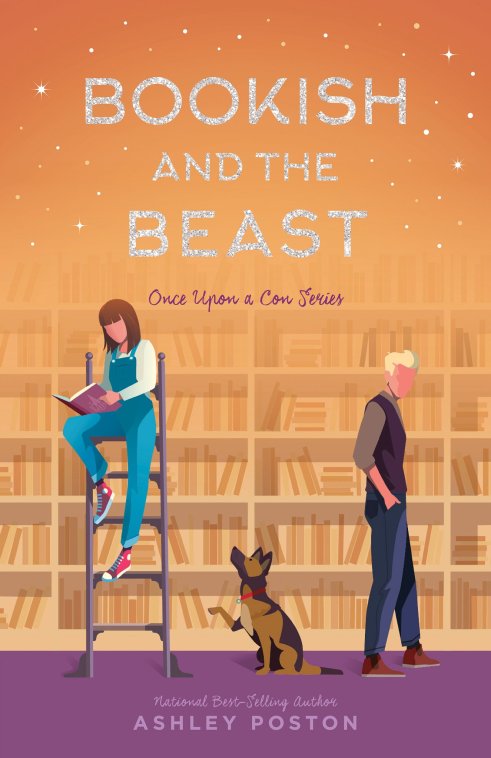 Rosie Thorne is feeling stuck—on her college application essays, in her small town, and on that mysterious General Sond cosplayer she met at ExcelsiCon. Most of all, she’s stuck in her grief over her mother’s death. Her only solace was her late mother’s library of rare Starfield novels, but even that disappeared when they sold it to pay off hospital bills.
On the other hand, Vance Reigns has been Hollywood royalty for as long as he can remember—with all the privilege and scrutiny that entails. When a tabloid scandal catches up to him, he’s forced to hide out somewhere the paparazzi would never expect to find him: Small Town USA. At least there’s a library in the house. Too bad he doesn’t read.
When Rosie and Vance’s paths collide and a rare book is accidentally destroyed, Rosie finds herself working to repay the debt. And while most Starfield superfans would jump at the chance to work in close proximity to the Vance Reigns, Rosie has discovered something about Vance: he’s a jerk, and she can’t stand him. The feeling is mutual.
But as Vance and Rosie begrudgingly get to know each other, their careful masks come off—and they may just find that there’s more risk in shutting each other out than in opening their hearts.

The thing that is most charming about the Once Upon a Con series is the combination of everyday fans and the actors playing characters they admire, and Bookish and the Beast tackles this dynamic best. I adored Vance’s villainous cameo in The Princess and the Fangirl and was so excited to see his perspective, as he is so different from the other two celebrity characters in the series. As the villain of the franchise and of Starfield, Vance has a really interesting insight into celebrity life and culture and the loneliness that can come with it.

Rosie was a lovely character and I loved her bookish nature, but she was definitely the most generic heroine of the series so far. However, I really loved her wonderfully supportive friend group and her dad — especially as he’s a single dad just doing his best! She was a sweet character and has a good storyline, but I found that there were many more interesting characters in the story — she fades in to the background a little.

As you’d expect with Poston’s books, Bookish and the Beast is a lovely contemporary fantasy retelling that deals with darker issues, including parental death before the book begins and harassment. I am always looking forward to the next installment in this series, and Bookish and the Beast was the perfect summer (quarantine) read.

Want to pick up a copy of Bookish and the Beast for yourself? You can find it at the following sites (affiliate links):

Have you read Bookish and the Beast yet? What about the other books in the series? What did you think? Let me know!

6 thoughts on “Book Review: Bookish and the Beast by Ashley Poston”