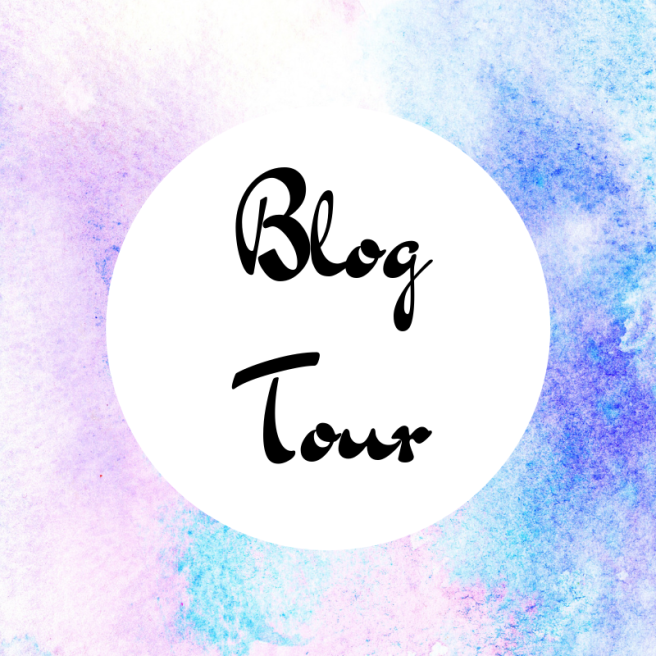 Welcome to my stop on the Incendiary blog tour! Incendiary has been on my radar for ages because I loved the idea of a Spanish Inquisition-inspired fantasy novel. Despite my recent ups and downs with YA fantasy, I gave my first Zoraida Cordova book a try, and I ended up really enjoying it! While I think that a lot more could have gone into the world-building and the characters, it is such a fun and addicting read with a great ending. 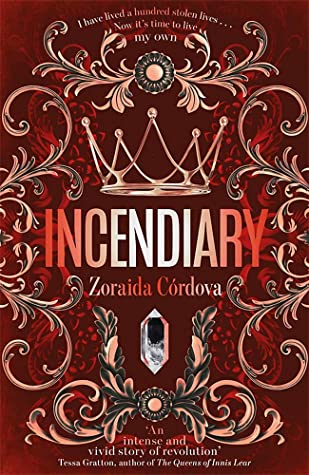 I have lived a hundred stolen lives.

Now I live my own.

Renata Convida was only a child when she was kidnapped by the King’s Justice and brought to the luxurious palace of Andalucia. As a Robari, the rarest and most feared of the magical Moria, Renata’s ability to steal memories from royal enemies enabled the King’s Wrath, a siege that resulted in the deaths of thousands of her own people.

Now Renata is one of the Whispers, rebel spies working against the crown and helping the remaining Moria escape the kingdom bent on their destruction. The Whispers may have rescued Renata from the palace years ago, but she cannot escape their mistrust and hatred–or the overpowering memories of the hundreds of souls she turned “hollow” during her time in the palace.

When Dez, the commander of her unit, is taken captive by the notorious Sangrado Prince, Renata will do anything to save the boy whose love makes her place among the Whispers bearable. But a disastrous rescue attempt means Renata must return to the palace under cover and complete Dez’s top secret mission. Can Renata convince her former captors that she remains loyal, even as she burns for vengeance against the brutal, enigmatic prince? Her life and the fate of the Moria depend on it.

But returning to the palace stirs childhood memories long locked away. As Renata grows more deeply embedded in the politics of the royal court, she uncovers a secret in her past that could change the entire fate of the kingdom–and end the war that has cost her everything.

I think the thing that will draw most readers in — like me — is the 15th century Spainish setting. I really loved the world of this book and the way Cordova shows the reader everything from the highest tiers of society to the lowest social classes and opressed rebels. The contrast is especially vivid when put into context by Renata’s character, who has a foot in both worlds. My only wish was that there was more world-building detail, however this is just because I’m totally greedy for the intricate details of clothing, food, architecture, and culture. We get a bit of this kind of detail– enough to flesh out the world and help the reader put the scenes into context — but there was so much potential for a lush and gorgeous world.

I felt similar regarding the magic system — it was really interesting but I would have loved to see more. I loved the Moria’s history and they way they are using their powers to fight back against their oppressors. While most of the Moria’s magic was pretty straightforward and very cool, there were bits that left me a little confused, especially regarding Ren’s abilities to remove and store memories. It would have been great to have Ren’s magic fleshed out a little more for better clarity and understanding.

There is a decent sized cast of characters, despite the fact that we only get one perspective. Renata is our main character and we see the story through her eyes. While I liked her and understood her motivations, I just didn’t connect with her as strongly as I have with other similar heroines. It’s hard to create a fully fleshed out character who doesn’t possess many of her own memories from her childhood, however I wish I was able to have that stronger connection with er! I ended up loving the secondary characters, especially Leo, and found them more memorable than the heroine herself. However, I think that she will get more development as the series progresses and I’m so eager to see where Ren’s story goes!

Incendiary is a great YA summer read filled with twists and turns. The ending left me desperate for more, and I’m incredibly excited to see where the series goes next!

Want to give Incendiary a try for yourself? You can find it at the following sites (affiliate links):

Have you read Incendiary? What did you think? Is it in your TBR? Let me know! And don’t forget to check out the other posts in the blog tour! 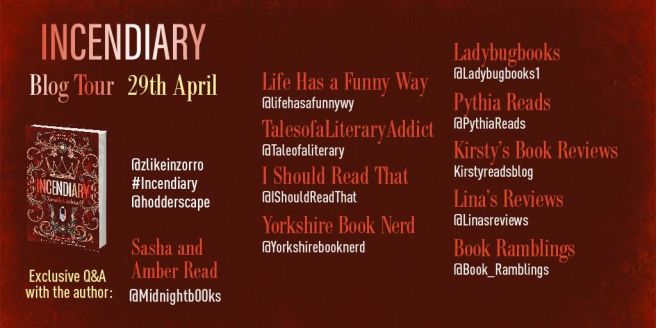 One thought on “Blog Tour: Incendiary by Zoraida Cordova”