The Harwood Spellbook is a delightful series of fantasy short novels and novellas centering on the Harwood family and their peers in an alternate version of Regency England. In a rigid world in which women are politicians and men are magicians, the Harwoods are shattering gender roles and pursuing their hearts. This series is one of my absolute favourite comfort reads!

In celebration of Moontangled’s publication, I’m bringing you mini reviews of both Thornbound and Moontangled. You can check out my reviews of the first two books, Spellswept and Snowspelled, here.

Cassandra Harwood scandalized her nation when she became the first woman magician in Angland. Now, she’s ready to teach a whole new generation of bright young women at her radical new school, the Thornfell College of Magic…

Until a sinister fey altar is discovered in the school library, the ruling Boudiccate sends a delegation to shut down Thornfell, and Cassandra’s own husband is torn away from her.

As malevolent vines slither in from the forest and ruthless politicians scheme against her, Cassandra must fight the greatest battle of her life to save her love, her school, and the future of the young women of Angland.

Thornbound continues directly from Snowspelled and it is just as delightful as the first book. Where Snowspelled focuses mostly on Cassandra as the only female magician in Angland, although she has lost her powers, Thornbound sees more and more women practicing magic with Cassandra as their teacher. I really enjoyed seeing Cassandra move forward with her school and continue to push the boundaries of polite society, but I’m also glad that the book shifts its focus from just her to include an entirely new group of women. I’m absolutely fascinated by the gender politics in this world and can’t wait to see how Burgis continues to play them out!

The story arc of the book is both bitterly frustrating with what Cassandra and her family are forced to deal with, yet also incredibly sweet and satisfying. Reading this book was an absolute treat! I cannot recommend the audiobooks more highly — Emma Newman is a fantastic narrator and her voice perfectly suits the tone!

I received a copy of this book from the author in exchange for an honest review. 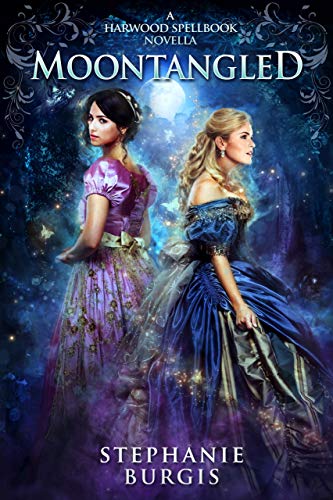 Take one ambitious politician and one determined magician with wildly different aims for their next meeting.

Add a secret betrothal, a family scandal, and a heaping of dangerous fey magic in an enchanted wood…and watch the sparks fly!

For just one moonlit, memorable night, Thornfell College of Magic has flung open its doors, inviting guests from around the nation to an outdoor ball intended to introduce the first-ever class of women magicians to society…but one magician and one invited guest have far more pressing goals of their own for the night.

Quietly brilliant Juliana Banks is determined to win back the affections of her secret fiancée, rising politician Caroline Fennell, who has become inexplicably distant. If Juliana needs to use magic to get her stubborn fiancée to pay her attention…well, then, as the top student in her class, she is more than ready to take on that challenge!

Unbeknownst to Juliana, though, Caroline plans to nobly sacrifice their betrothal for Juliana’s own sake – and no one has ever accused iron-willed Caroline Fennell of being easy to deter from any goal.

Their path to mutual happiness may seem tangled beyond repair…but when they enter the fey-ruled woods that border Thornfell College, these two determined women will find all of their plans upended in a night of unexpected and magical possibilities.

I am not proud to admit that I let out a little squeak of delight when I found out that Juliana and Caroline were getting their own novella. Their love story and secret engagement has been playing out in the background for too long! I’m a sucker for secret fiances and star-crossed lovers, so I knew I would love this before I even opened it up.

Burgis does a fantastic job of setting up the story with just the right about of yearning, hardheadedness, and miscommunication from our ladies. Throw in some humour, good friends, and a magical wood and you have a perfect romance novella.

I love the setting of these books so much, and with the introduction of new characters in this Moontangled I’m hoping that we get to see more of the students at Harwood College of Magic get their own stories and happily ever afters. Regardless of what happens in the next book in the series, I can guarantee I’ll be devouring it as soon as I am able.

That’s it for these two reviews! Have you read any books in this series? What did you think? Is it in your TBR? Let me know!

One thought on “Book Review: Thornbound and Moontangled by Stephanie Burgis”