The Unlikely Escape of Uriah Heep by H. G. Parry

There is a certain kind of magic that you get from books about books — regardless of age range or genre, these kinds of stories will always warm my heart. I was absolutely thrilled to get the chance to read The Unlikely Escape of Uriah Heep before the UK publication date and was totally charmed by this fantastic book! 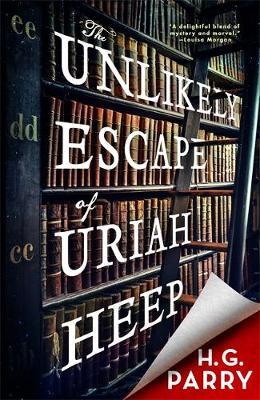 For his entire life, Charley Sutherland has concealed a magical ability he can’t quite control: he can bring characters from books into the real world. His older brother, Rob — a young lawyer with a normal house, a normal fiancee, and an utterly normal life — hopes that this strange family secret will disappear with disuse, and he will be discharged from his life’s duty of protecting Charley and the real world from each other. But then, literary characters start causing trouble in their city, making threats about destroying the world… and for once, it isn’t Charley’s doing.

There’s someone else who shares his powers. It’s up to Charley and a reluctant Rob to stop them, before these characters tear apart the fabric of reality.

The Unlikely Escape of Uriah Heep focuses mainly on Victorian literature, particularly the works of Charles Dickens, however I do not think you need to have read — or studied, in my case — classics in order to comprehend the wonder of this book. Regardless of whether or not you’re a fantasy fan, I think you’ll love this book if you’re a reader.

For me, this book can be summed up in one word: charming. You can really feel Parry’s passion not only for these classic tales, but for the original characters she creates as well. Parry does a fantastic job of taking beloved and well-known characters and breathing life into them — each was recognisable from the source material yet felt like an original creation. She adds layers of creativity and innovation with the magic that brings these characters into the real world — they manifest with certain aspects of their readers’ imagination so no two individual characters (or five, in some cases) are quite the same.

However,  the book doesn’t just focus on fictional favourites. Rob and Charley had just as much spark to them as characters like Uriah Heep or Heathcliff, and the interactions between the fictional characters and real people were just wonderful. There was so much humor and banter and I got so much joy from reading this book — it’s the prefect thing to snuggle up with on sofa in the evenings.

But this book isn’t just fluff and literary love. My favourite aspect of the book is actually the deep and complex relationship between Rob and Charley — in a way, this book is really all about the complexities of familial relationships, especially between siblings who are just dramatically different people. I really loved the fact that the story is told from Rob’s point of view rather than Charley’s — who would maybe be the more obvious choice for a POV character. This gave a much more interesting perspective on the narrative because of his complicated feelings about Charley and the amazing and unique power he possesses. Giving the reader the complexity of his point of view helped shape this book from a good one to a great one.

The Unlikely Escape of Uriah Heep is a lovely, complex, and charming book that is sure to delight any book lover. I couldn’t recommend it more highly, regardless of whether you’re a reader of classics or not.

Want to try The Unlikely Escape of Uriah Heep for yourself? You can find it at the following sites (affiliate links):

Have you read The Unlikely Escape of Uriah Heep? What did you think? Is it in your TBR? Let me know!