Day of the Triffids by John Wyndham

I’ve been wanting to pick up more classic science fiction lately, so I pulled Day of the Triffids off my shelf. It had been sitting there for well over a year and I had never picked it up. Despite it being a famous novel and film, I didn’t know anything about Day of the Triffids before I started it. I ended up really loving this classic dystopian novel! 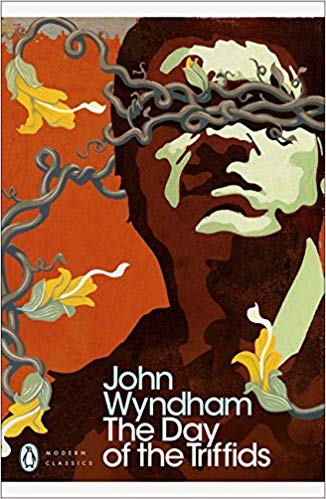 When Bill Masen wakes up blindfolded in hospital, there is a bitter irony in his situation. Carefully removing his bandages, he realises that he is the only person who can see: everyone else, doctors and patients alike, have been blinded by a meteor shower. Now, with civilization in chaos, the triffids – huge, venomous, large-rooted plants able to ‘walk’, feeding on human flesh – can have their day.

The Day of the Triffids, published in 1951, expresses many of the political concerns of its time: the Cold War, the fear of biological experimentation and the man-made apocalypse. However, with its terrifyingly believable insights into the genetic modification of plants, the book is more relevant today than ever before.

First, a fun fact. If you read that first sentence  of the above description, it may sound a little familiar. The opening scenes of the film 28 Days Later was directly inspired by Day of the Triffids, from our protagonist waking up in the hospital having missed the apocalyptic event to him wandering through a completely changed and emptied London. Having only seen the film a day or so before I picked up this book, it was a total delight to recognise the parallels between the two!

I loved Wyndham’s depiction of a post-apocalyptic England. Not only was it incredibly inventive, he did a great job of investigating how both sighted and blind people would actually survive. Some of the book is uncomfortable, particularly the capture and essentially enslavement of sighted people to guide the blind, but I was very pleased to see it didn’t go into some of the ickier ideas around women in a post-apocalyptic society (see: 28 Day’s Later). This book is more about survival of small groups than of society as a whole, and I thought that was a really interesting perspective. There are, of course, some people with their own ideas of how humanity should survive, but Bill’s story really dominated the book.

Where are the triffids, you may be asking? Well, I was actually really surprised to see that the triffids don’t play as big of a role as I had thought. In the first half of the book they’re more of a sinister presence, however they begin to play a larger role in the second half. I absolutely loved the triffids not only as a weird presence, but as a way of showing how nature seizes back its power from mankind. More triffids, I say!

I thought this book was surprisingly modern in some of its ideas, however it does show its age in some ways. There’s a fair bit of sexism, however it was something that I can chalk up to being a product of its time rather than something truly malicious.

Day of the Triffids is a ridiculously fun take on the post-apocalyptic genre and I can absolutely see why it has had such a strong cultural impact. If you’re interested in a classic of the sci-fi genre, you should absolutely pick it up! I’m very much looking forward to seeing the film and checking out more of John Wyndham’s books.

Want to try Day of the Triffids for yourself? You can pick up a copy at the following sites (affiliate links):

Have you read Day of the Triffids? What did you think? What are your favourite classic sci-fi novels? Let me know!

One thought on “Book Review: Day of the Triffids by John Wyndham”