I was provided a copy of this book by the publisher in exchange for an honest review. This is a spoiler-free review.

Welcome to my stop on the A Little Hatred blog tour! I cannot tell you how thrilled I was to hear that one of my favourite authors was coming out with a new book. Not just that, he was launching us back into the First Law world, one of my favorite fantasy settings ever. Living up to an amazing series like the First Law trilogy and the three standalone novels is a tall order, however Abercrombie has managed to keep up the quality of his books and start the Age of Madness trilogy with a bang. 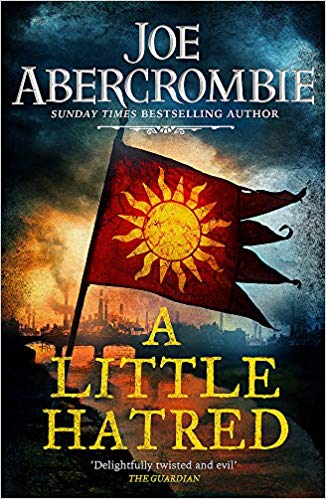 The chimneys of industry rise over Adua and the world seethes with new opportunities. But old scores run deep as ever.

On the blood-soaked borders of Angland, Leo dan Brock struggles to win fame on the battlefield, and defeat the marauding armies of Stour Nightfall. He hopes for help from the crown. But King Jezal’s son, the feckless Prince Orso, is a man who specializes in disappointments.

Savine dan Glokta – socialite, investor, and daughter of the most feared man in the Union – plans to claw her way to the top of the slag-heap of society by any means necessary. But the slums boil over with a rage that all the money in the world cannot control.

The age of the machine dawns, but the age of magic refuses to die. With the help of the mad hillwoman Isern-i-Phail, Rikke struggles to control the blessing, or the curse, of the Long Eye. Glimpsing the future is one thing, but with the guiding hand of the First of the Magi still pulling the strings, changing it will be quite another…

I think many readers’ first question will be ‘can I read this without having read his other books?’ and I think it’s a tough one to answer. I have seen many readers pick up and enjoy A Little Hatred without having read the other First Law books. However, I think it would be hugely beneficial to at least read the original trilogy first. You’ll have a better feel for the characters, setting, and context of the various conflicts and schemes, but more importantly (to me, at least) you’ll be able to pick up the throwbacks to the other books. A seemingly unimportant conversation between two characters will actually be a gut-punch to someone who has read the other books, for example. Just my two cents, on to the actual review!

About 20-30 years have come and gone since the events of the First Law trilogy, and the world is changing. I love Industrial Revolution-inspired fantasy settings and Abercrombie does a fantastic job of launching Adua in to a new age. As this book doesn’t just focus on one class of people — there are POV characters ranging in social status from the heir to the throne to the most impoverished working class people fighting for survival — you get such a great sense of how industry is impacting the world. Although the North is always my favourite setting in his books, I absolutely loved the story lines that took place in Valbeck — an industrial city with horrendous working conditions and immense poverty. Abercrombie has a real knack for blurring the lines of good and bad, and the most impactful chapters take place in Valbeck.

When I think of Abercrombie’s books, the fantastic characters always spring to mind first. He is the absolute master of writing grey area characters, and A Little Hatred is no exception. Something that I really appreciated about this book is the number of female characters in it. His books always feature at least a few women, but he’s stepped up the number of female characters with this new trilogy and I really think it is better for it. My favourite character was obviously Savine dan Glokta — the ruthless businesswoman and daughter of everyone’s favourite torturer –and I also loved Rikke and Vic, who are formidable women in their own right.

I could honestly go on and on about this book, so I’ve only picked out some highlights. If you’re a fan of the First Law books, you’re going to love A Little Hatred. If you’re new to this world and decide to pick this up, I think you’re going to be absolutely sucked in and unable to resist picking up the others. Deliciously funny and horribly grim, A Little Hatred is a perfect addition to the grimdark subgenre. This is undoubtedly one of the best books of 2019!

Want to try A Little Hatred for yourself? You can find it at the following sites (affiliate links):

Have you read A Little Hatred yet? Is it on your TBR? Have you checked out the other stops on the blog tour? Let me know!

One thought on “Blog Tour: A Little Hatred by Joe Abercrombie”