The Devouring Gray is a book that has had so much buzz around it over the past year. Although it was one of my most highly anticipated books of the spring, I figured it would be a fun but over hyped book — I’ve been burned by this before and I try to be cautious and manage my expectations. Much to my delight, I really enjoyed and absolutely devoured (ha) this book. The Devouring Gray was exactly what I needed and very nearly read it in one sitting — something I haven’t done in ages. 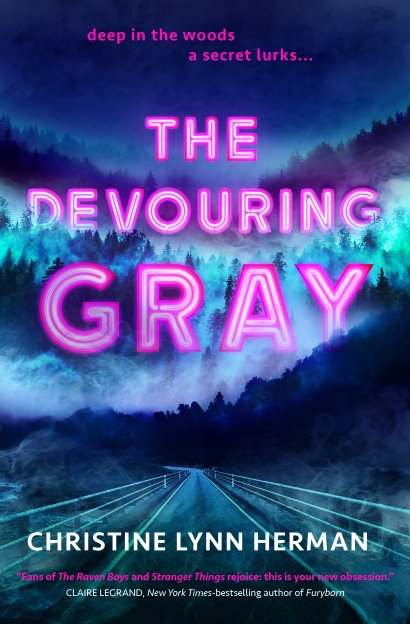 Branches and stones, daggers and bones,

They locked the Beast away.

After the death of her sister, seventeen-year-old Violet Saunders finds herself dragged to Four Paths, New York. Violet may be a newcomer, but she soon learns her mother isn’t: They belong to one of the revered founding families of the town, where stone bells hang above every doorway and danger lurks in the depths of the woods.

Justin Hawthorne’s bloodline has protected Four Paths for generations from the Gray—a lifeless dimension that imprisons a brutal monster. After Justin fails to inherit his family’s powers, his mother is determined to keep this humiliation a secret. But Justin can’t let go of the future he was promised and the town he swore to protect.

Ever since Harper Carlisle lost her hand to an accident that left her stranded in the Gray for days, she has vowed revenge on the person who abandoned her: Justin Hawthorne. There are ripples of dissent in Four Paths, and Harper seizes an opportunity to take down the Hawthornes and change her destiny-to what extent, even she doesn’t yet know.

The Gray is growing stronger every day, and its victims are piling up. When Violet accidentally unleashes the monster, all three must band together with the other Founders to unearth the dark truths behind their families’ abilities—before the Gray devours them all.

What really stands out about this book is the world building. You get a such a feel for the town of Four Paths, its residents, and its culture and traditions — the world really came to life for me. In many ways the setting feels familiar enough, but it’s also very much its own unique place. The Gray, however, is extremely reminiscent of Stranger Things’s Upside Down. I really love the Upside Down as a concept and the Gray gives you the same vibe and feeling — it translates really well from the page. It doesn’t bother me that the two are so similar, but I do wonder which came first — Herman’s idea or Stranger Things.

The use of power in The Devouring Gray is another interesting thing to note — we don’t get a particularly in-depth understanding of the magic system and is definitely something I’m looking forward to exploring in the next book. The magic is like X-Men crossed with witchy ritual and I really enjoyed reading about the way it manifests and is controlled.

We get to read the point of view of all four main characters, however The Devouring Gray really feels like Violet’s book. Without spoilers, I really enjoyed her story arc and her discovery of the secrets of Four Paths. Sharing the spotlight with Violet is Harper, a character I really admired. Harper is such a strong and kickass girl who doesn’t let her changed circumstance bring her down — I really loved her unapologetic rage, which I don’t think we see often enough from teen girls in books. I think Harper was my favourite character, although I really liked Violet as well — the girls really shine in this story. Justin and Isaac were both really interesting and had good character arcs, but weren’t as memorable for me. I was a little disappointed we didn’t get to see more of Isaac, but I think this will be resolved in later books.

Overall, The Devouring Gray is totally worth your time. It feels like a cross between Sawkill Girls and Stranger Things with some shades of Buffy, but still manages to maintain its own unique flavour. If you’re looking for a fun YA fantasy in a modern setting with great bisexuality representation, you should absolutely pick up The Devouring Gray.

Want to try The Devouring Gray for yourself? You can find it at the following sites (affiliate links):

Have you read The Devouring Gray? What did you think? Is it in your TBR? Let me know!