This review contains very minor spoilers for Throne of Glass because let’s be honest, I’m one of the few people who hadn’t read this already!

I have started a very casual project of reading some classic YA books that have helped build the genre into what it is today. Throne of Glass was the first book I read for this little project, and I have to admit that I assumed I’d hate it. I’m (now) very vocal about my grumpy feelings toward A Court of Thorns and Roses, the first book in Sarah J. Maas’s other series, and figured some of those themes I strongly disagreed with would carry over into Throne of Glass. So you can imagine my surprise when I actually found myself enjoying Throne of Glass! Is it brilliant? No, I don’t think so. But damn, is it a compulsive readable. I buddy read this with brilliant author, blogger, and YouTuber Josie Jaffrey and I think that was the best way for me to tackle this book. I’d highly recommend the audiobook because of the story’s pace and plot — your house will never be cleaner. 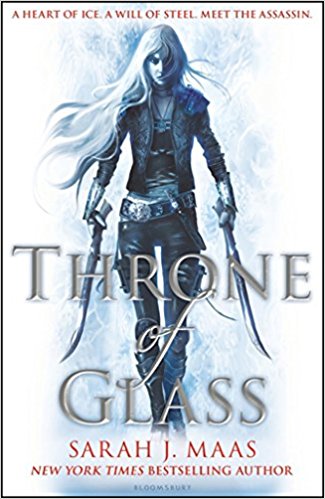 After serving out a year of hard labor in the salt mines of Endovier for her crimes, 18-year-old assassin Celaena Sardothien is dragged before the Crown Prince. Prince Dorian offers her her freedom on one condition: she must act as his champion in a competition to find a new royal assassin.

Her opponents are men-thieves and assassins and warriors from across the empire, each sponsored by a member of the king’s council. If she beats her opponents in a series of eliminations, she’ll serve the kingdom for three years and then be granted her freedom. Celaena finds her training sessions with the captain of the guard, Westfall, challenging and exhilarating. But she’s bored stiff by court life. Things get a little more interesting when the prince starts to show interest in her… but it’s the gruff Captain Westfall who seems to understand her best.

Then one of the other contestants turns up dead… quickly followed by another. Can Celaena figure out who the killer is before she becomes a victim? As the young assassin investigates, her search leads her to discover a greater destiny than she could possibly have imagined.

Throne of Glass is funny in that it almost feels like two different books stitched together. We have two main plots — the competition that may earn Celaena her freedom and the seemingly random magical plot that I imagine sets up the rest of the series. I much preferred the competition plotline, and it would have been great to see more of the tests and trials that Celaena endures. However, the magic that starts as a subplot is really the only place we get world building in this book and I think that was one of the book’s biggest weaknesses — I wish we knew more about the world and the magic.

So, characters. Well, there are a lot of them. And if I’m honest, they’re mostly incredibly dull and flat — I found most very one-dimensional. This book really suffers from ‘telling’ rather than ‘showing’, meaning that we are told that our characters can do certain things or act in a certain way, however there is little to no action to back it up — I really struggle with books like this because the little voice in my head keeps shouting ‘OH YEAH? PROVE IT!’ as I’m reading.

Celaena has to be the most boring, least murdery assassin on the planet, and I found her so disappointing — she should have been a great character!. She’s constantly telling us how incredibly skilled she is in fighting and  weaponry, however we rarely see any of it. In fact, there is only a single moment in the book in which she actually fights and it is an intentionally short sequence in order to show how skilled she is at taking down an opponent. I didn’t believe a single word of this girl being a badass fighter because she’s all talk and no action — she never proves she’s good at anything except making tiny, ineffective makeshift knives.

Similarly, Prince Dorian is supposed to be a playboy-type character and constantly womanizing, but again he does literally none of this. In fact, he’s most often turning women away. I’ve read enough historical romances that feature rakes to know that it is extremely possible to have this kind of character and give him a fantastic redemption arc, however Maas didn’t commit to having him be rougish in any way. Josie and I talked about this and she said that Maas didn’t commit to having unlikeable characters, and this is probably why Celaena and Dorian feel so dull and flat — I think she’s 100% correct in this. By not committing to a murdery assassin character who seeks redemption or a roguish womaniser that changes his ways, she has already told me that there will be little of interest for me in terms of redemption and character growth from these two.

So, who did I like? I liked Chaol, although much like Celaena and Dorian he needs a bit more meat to his story.   I really enjoy grumpy soldier characters, particularly in YA, and he was just great. I appreciated every grumbly and grumpy moment of his. The best character in the book, however, is Nehemia. Nehemia, the semi-captive princess of a foreign land rebelling against the king, is really the only character that has an interesting story, compelling actions, and satisfacorty characterisation. I’d really lovve to read more about her and hope she features in later books!

Overall, Throne  of Glass isn’t a particularly strong book, but I did really enjoy reading it. For me, this series is a lot like The Selection — not very good but super fun and ridiculous. Josie and I are going to buddy read the second book, Crown of  Midnight, and see what we think!

Want to give Throne of Glass a shot? You can pick up a copy here (affiliate links):

Have you read Throne of Glass? Do you love it or hate it? Is it in your TBR? Let me know!