I had never read anything by Jay Kristoff before, but I know his books are so beloved by so many readers.  I hadn’t gotten around to reading him because I was convinced I wouldn’t enjoy them — I’m not really sure where that idea came from but it stuck.  Shanah from Bionic Bookworm convinced me to read Nevernight and recommended the audiobook version. She was spot on — Nevernight is a book that begs to be read aloud and was the most fun I’ve had reading in a long time. 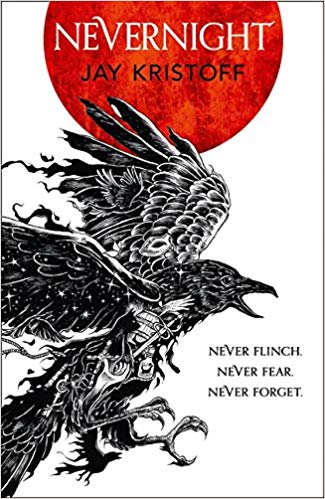 Destined to destroy empires Mia Covere is only ten years old when she is given her first lesson in death.

Six years later, the child raised in the shadows takes her first steps towards keeping the promise she made on the day that she lost everything.

But the chance to strike against such powerful enemies will be fleeting, so if she is to have her revenge, Mia must become a weapon without equal. She must prove herself against the deadliest of friends and enemies, and survive the tutelage of murderers, liars and demons at the heart of a murder cult.

The Red Church is no Hogwarts, but Mia is no ordinary student. The shadows loves her. And they drink her fear.

I adore the boarding school trope — who didn’t want to go to Hogwarts? — but I’ve never seen it done like this before.  Nevernight is what would happen if the Harry Potter series had sex, death, murder, gore, and swearing. Basically, it’s my exact kind of book.  The world building is marvelous, aided by footnotes that are both informative and hilarious. The narrative voice that Kristoff uses is just so incredibly sharp and funny.  It’s not just the tone of his writing that works, but the wonderful writing style. The beautiful way he describes the fight sequences, Mia’s turmoil of emotions, and the actions and reactions of every character are just stunning.  There’s a scene at the beginning of the book that blends sex and death so beautifully — it’s just astonishingly well done.  I believe that this is the point in whic you’ll figure out if Nevernight is the kind of book for you.  I love the writing style so much and will read anything he has written based off of this one book.

Mia is an unexpectedly fantastic character.  My experiences with teenage girl assassin books — is that a genre? — have been pretty disappointing until now.  Why? Because they either don’t do any assassinating, spend so much time dwelling on their feelings, or end up letting go of their revenge and becoming better people.  Not Mia. Mia is driven by hate and revenge and they fuel her throughout the book. She’s very much like Arya Stark in a way — except that I love Mia and hate Arya, I’m not sure I can explain that one.  Mia follows her own moral code and I really loved watching her puzzle out the rights and wrongs in her quest for revenge.  She is not a hateful person though. She has friends and allies and it is so wonderful to watch her relationships unfold. I just cannot emphasise how much I absolutely adored this foul mouthed girl — she’s a new favourite character for me.

I think it would be very easy to focus on Mia as a writer — she’s such a strong character — and disregard everyone else’s back story.  However, this is not the case.  The secondary characters really help bring the story to life and I absolutely love her interactions with those around her.  Mia is surrounded by friends, something I love in books, and the wide cast of characters is well fleshed out.  From her instructors to her mentor Mercurio, to Tric and Ashlinn, everyone contributes to the story.  Ashlinn is a particular favourite, as is Mercurio.

You know who else is a favourite?  Mr. Kindly. Why did no one tell me there was a smug, sarcastic, pain in the ass shadow cat in this book?  He is the absolute best.

Nevernight is the kind of book that works for you or absolutely does not.  It’s the perfect book to listen to on audio, and I couldn’t recommend it more highly.  Not only is the narrator astonishingly good, the book is written as though it was a story being told.  This makes it the perfect audiobook.  I can easily see the writing as being quite dense — I’m not sure I would have enjoyed it as much if I read it in a physical format — and would highly recommend choosing the audiobook.

Want to buy Nevernight?  You can find it at the following sites (affiliate links — although I urge you to go get it from Audible):

Have you read Nevernight?  What did you think? Is it in your TBR? Have you read Godsgrave yet (I just finished)? Let me know!