All Systems Red by Martha Wells

Apparently this has been the Summer of the Novella for me — I recently read the three books in the Wayward Children series by Seanan McGuire and The Blue Salt Road by Joanne M. Harris.  While novellas aren’t something I often read, I really feel like I’ve been missing out on great stories lately.  All Systems Red is a book I’ve been hearing amazing things about, so I decided to take a chance. 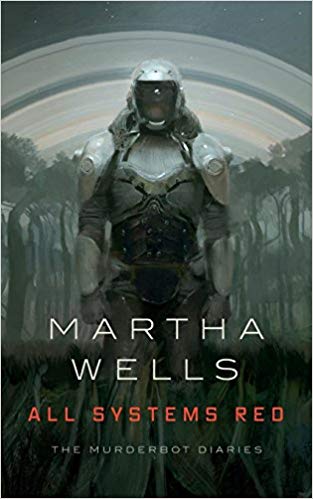 In a corporate-dominated spacefaring future, planetary missions must be approved and supplied by the Company. Exploratory teams are accompanied by Company-supplied security androids, for their own safety.

But in a society where contracts are awarded to the lowest bidder, safety isn’t a primary concern.

On a distant planet, a team of scientists are conducting surface tests, shadowed by their Company-supplied ‘droid — a self-aware SecUnit that has hacked its own governor module, and refers to itself (though never out loud) as “Murderbot.” Scornful of humans, all it really wants is to be left alone long enough to figure out who it is.

But when a neighboring mission goes dark, it’s up to the scientists and their Murderbot to get to the truth.

One of the reasons I’ve avoided novellas is that I feel like there just aren’t enough words and the story doesn’t reach its full potential.  This really felt like the case with All Systems Red.  I absolutely love the concept of “Murderbot” — a security robot created of organic and inorganic parts that hacks its own system, gains sentience and a sort of freedom, becomes socially awkward, and wants all the humans to just shut up so it can watch its soap operas — but I didn’t feel like the book fell a little short because of the word count.  One of the things that I loved about Every Heart a Doorway, another recent novella read, is that the author manages to create a beautiful, fully realised world in under 200 pages.  I don’t feel like this is the case with All Systems Red.

While I didn’t connect with the human characters — they basically have little to no development and are treated more like window dressings than anything else — what I did love about this book is Murderbot.  I’m not sure how, but Wells has managed to create a character that calls itself ‘Murderbot’ and still manages to be one of the most delightfully relatable characters I’ve read in sci-fi.  Murderbot does its duty to protect the scientists, but still longs for downtime to watch its vast collection of videos. I love any character that struggles to discover what it means to be human, and that is exactly what Murderbot is trying to do.  Their attempts to control their emotion and reactions to the hazardous situation and their knowledge of how the crew must feel about having such a being onboard with them were all really well done. I don’t want to say too much, but Murderbot’s character arc is just wonderful to read and has a sense of completion while opening the opportunity for a series.

Overall, I liked All Systems Red, but I wish it was a longer book.  I feel like there’s so much left unexplored in this world.  The plot reads like a thriller and should be filled with twists and turns, but is fairly straightforward — I would have loved a little more mystery.  I did love Murderbot themselves, and will continue to read this series if I find the other books on sale for Kindle or from my local library.

Want to buy All Systems Red?  You can find it on Kindle (affiliate links):

Have you read All Systems Red?  What did you think?  Do you like to read novellas or do you prefer longer books?  Let me know!

4 thoughts on “Book Review: All Systems Red by Martha Wells”