I received a copy of this book in exchange for an honest review.  This review is spoiler-free.

Uprooted is a book that I absolutely love and am very thankful for.  It’s the book that broke the worst reading slump of my life, which had been carrying on for months. I love it so much, despite its (romance) problems, and I constantly recommend it.  You can probably imagine my excitement when I heard about her next novel, Spinning Silver.  After months of pining, my copy arrived in the post and I was so thrilled to get reading. 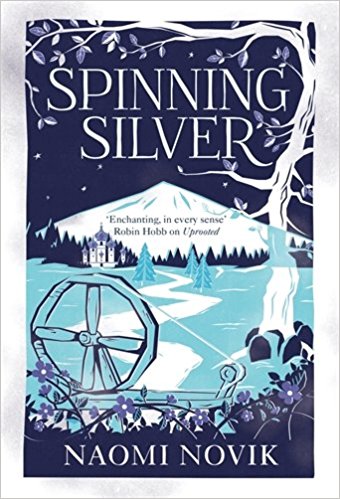 Miryem is the daughter and granddaughter of moneylenders… but her father isn’t a very good one. Free to lend and reluctant to collect, he has loaned out most of his wife’s dowry and left the family on the edge of poverty–until Miryem steps in. Hardening her heart against her fellow villagers’ pleas, she sets out to collect what is owed–and finds herself more than up to the task. When her grandfather loans her a pouch of silver pennies, she brings it back full of gold.

But having the reputation of being able to change silver to gold can be more trouble than it’s worth–especially when her fate becomes tangled with the cold creatures that haunt the wood, and whose king has learned of her reputation and wants to exploit it for reasons Miryem cannot understand.

Spinning Silver is loosely based on Rumpelstiltskin, which is something you don’t see very often as it’s not the sexiest of fairy tales.  However, that made the book feel like such a fresh and unique retelling at a time in which retellings are incredibly common. It is a novel-length fairy tale much like Uprooted, however it is a much more complex story.  There are six point of view characters, something that really could have failed but ended up working out very well. I loved the way the different threads of the story came together to form a bigger picture — I really enjoyed getting so many different sides to the same situation.  Although the pacing is a little slow at times, I thought she did a particularly good job with such a complicated structure.  It’s quite a long novel, however I didn’t really think anything could be trimmed out.

This is such a character driven book, which is no surprise with six POV characters.  The unsurprising standout for me was Miryem, who is the main character of the book. While Agnieszka in Uprooted felt like a very generic fantasy heroine, Miryem really stands out and is so memorable.  She’s a sharp and capable woman who is completely undervalued by everyone she meets.  From her loving family to the townsfolk, no one quite views Miryem with the respect and understanding she deserves.  To complicate matters, she lives in a time and place in which Jewish people are shunned, and the undertones of anti-Semitism run through the book.  She’s often described as cold and calculating by her parents and the townsfolk who are her clients.  I’m actually not sure if Novik means for us to believe Miryem is actually a cold and harsh woman. To me, she just felt like a modern woman born in the wrong time — there’s so much to admire about her.  She’s easily one of my new favourite characters in fantasy.

Irina and Wanda were other favourite POV characters in this book.  They both possess a similar inner strength to Miryem and stand out as well-written and interesting characters.  The women in Spinning Silver are all fantastic — they embody the quieter side of the ‘strong female character’ trope and were just so well written.  Similar to Uprooted, I thought the male characters, such as the Staryk king and the Tsar, were considerably weaker than their female counterparts — it felt like Novik just didn’t have the same interest in writing and developing them as she did in the women.  In fact, I thought that the weakest of the point of view characters was Stepon, Wanda’s youngest brother. It’s hard to be a standout POV character when you’re an eight-year-old boy and the others are adult women though, so I give him a little bit of a pass.  However I found myself reading through his sections quickly to get back to our heroines.  When readers think back on this book, the women will be the ones they remember and the men will fade into the background.

Spinning Silver is a brilliant, wintery fairy tale that is a perfect escape.  As much as I love Uprooted, I do think that Spinning Silver is the better book — it is complex and compelling and has so many wonderful characters.  I’d highly recommend this to Novik’s established fans, as well as readers who loved Katherine Arden’s Winternight trilogy.  If you liked the Russian folklore vibes and strong, interesting heroine from The Bear and the Nightingale and The Girl in the Tower, you’ll probably love this book too.

Want to buy Spinning Silver?  You can pick it up on the following sites (affiliate links):