Beneath the Sugar Sky by Seanan McGuire

This review does not contain spoilers for Beneath the Sugar Sky, but it does contain major spoilers for Every Heart a Doorway.  If you are planning on reading the first book, check out my review here instead.

The Wayward Children series has been quite a rollercoaster ride for me.  I absolutely adored Every Heart a Doorway and despised Down Among the Sticks and Bones.  I wasn’t entirely sure how to feel when I picked up Beneath the Sugar Sky, the third book in the series.  Would I be delighted? Disappointed? Underwhelmed? The first two books felt like they were written by two different people — would I get the writing style I loved so much in Every Heart a Doorway back again? 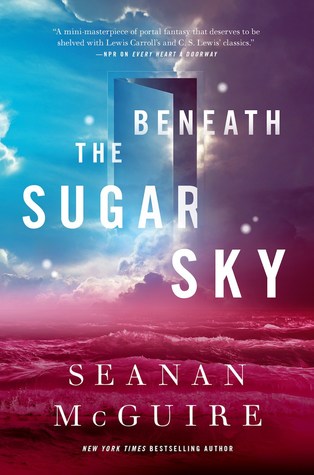 Beneath the Sugar Sky returns to Eleanor West’s Home for Wayward Children. At this magical boarding school, children who have experienced fantasy adventures are reintroduced to the “real” world.

Sumi died years before her prophesied daughter Rini could be born. Rini was born anyway, and now she’s trying to bring her mother back from a world without magic.

I’m so pleased to say that I enjoyed Beneath the Sugar Sky — it definitely redeemed the series for me.  There was so much in this book that was lacking in the second one — we returned to the lush fantasy worlds beyond the doorways, revisited Eleanor West’s school, saw old favourites, and met marvelous new characters.  This is what I wanted from Down Among the Sticks and Bones, and this is ultimately the reason I will continue with the series.

Beneath the Sugar Sky corrects one of the greatest tragedies of Every Heart a Doorway — the murder of Sumi.  Sumi was one of the best and most vivid students in Eleanor West’s school and it was so heartbreaking to see her killed off early in the book.  While Sumi doesn’t play a huge role herself in this book — she is dead, after all — the attempts of her friends and Rini to bring her back were absolutely lovely and heartwarming with the dash of horror that McGuire nailed so well in Doorway. The gang get to wander through worlds that were only hinted at in the first book, which was one of my favourite parts of Beneath the Sugar Sky.  Most notably, they go to Sumi and Rini’s Nonsense world. This was one of the places I was most curious about, and it ended up reminding me so much of Orléans in The Belles. On the surface it sounds fanciful, ridiculous, and silly, but there’s an undercurrent of rot and horror that the reader soon uncovers. I really liked the way McGuire utilized this world and its citizens to create tension within the story, something that felt lacking in Sticks and Bones (I’ll stop harping on how much I disliked this book soon).

The best thing about these books is the characters.  I loved revisiting old favourites like Christopher and Kade, but also meeting new characters like Cora.  Christopher was the standout for me — he’s in the first book, but plays such a small role that we don’t really get to know him at all.  His growth is so strong in Beneath the Sugar Sky and I cannot wait for him to get his own novella. I know she’s not the most popular, but I really enjoyed reading Cora’s point of view.  She dwelt on her body image a little more than necessary in my opinion, but I loved how strong, physically and emotionally, she was. She’s such a great addition to the series and I absolutely loved the descriptions of the Trenches, the world that she lived in.  Of all the worlds described in these books, it’s the only one I’d love to go to myself.

The only character that I wasn’t a huge fan of was Rini.  She’s sort of like a budget version of Sumi, who is just astonishing wonderful.  It makes sense that they would be really similar, however I just didn’t think she really lived up to her mother.  The way that she acted made her come across as much younger than she actually was — I would have assumed she was 11 or 12.  It’s a shame that she was the weakest — I think she really could have benefitted from having more of a separate personality from her mother.

Overall I really enjoyed this book.  It was so engaging and inventive — it felt like McGuire got back on the right path for the series.  My faith in the series is now restored, and I cannot wait for the next book.

Want to read Beneath the Sugar Sky?  You can pick up a copy at the following sites (affiliate links):

Have you read these books?  What did you think?  Which is your favourite?  Let me know!

2 thoughts on “Book Review: Beneath the Sugar Sky by Seanan McGuire”