June is a wrap!  I can’t believe June is already over — where has the time gone?  Fortunately, July is here and that means YALC is around the corner!  How is my YALC TBR going?  It’s best to just not ask.

I managed to read a whopping 13 books this month!  I feel like I’m spending more and more time reading, which is great!  I also may or may not have been spoiled for my birthday with books and giftcards, so I still ended up bringing in more books than I read this month.  You know what?  This is my brand.  I am on brand.

Notes on a Nervous Planet by Matt Haig

Harry Potter and the Prisoner of Azkaban by J. K. Rowling

My Friend Dahmer by Derf Backderf

Every Heart a Doorway by Seanan McGuire

The Rising Storm by Ceri A. Lowe

The Hazel Wood by Melissa Albert

The Woman in the Window by A. J. Finn (review)

The Seven Husbands of Evelyn Hugo by Taylor Jenkins Reid

Simon versus the Homo Sapiens Agenda by Becky Albertalli

Reviews for all these books are coming up if they aren’t already live!  I actually am reading so much that I need to increase my review posting schedule.  Yikes.

The best books this month were easily Ravencry, City of Blades, The Light Over London, and Every Heart a Doorway.  I’m not allowed to review Author Sister’s marvelous book, but I can safely say that even if I weren’t massively biased I would love it.  Go preorder it.  Seriously.

Can you tell I went to a Joanne Harris event this month?  She did an event at Waterstones and I went with Judith from Chain Interaction and one of my other friends!  We had a marvelous time and got to chat with the lovely Joanne.  I’m in awe of her storytelling ability and general kindness.

The Fall of Arthur translated by J. R. R. Tolkien

Every Heart a Dooryway by Seanan McGuire

Down Among the Sticks and Bones by Seanan McGuire

Beneath the Sugar Sky by Seanan McGuire

My Friend Dahmer by Derf Backderf

The Beast Player by Nanoko Uehashi

The Stranger Beside Me by Ann Rule

The Seven Husbands of Evelyn Hugo by Taylor Jenkins Reid

Empire of Black and Gold by Adrian Tchaikovsky

The Thrilling Adventures of Lovelace and Babbage: The (Mostly) True Story of the First Computer by Sydney Padua

Reign of the Fallen by Sarah Glenn Marsh

The Bedlam Stacks by Natasha Pulley

The Ocean at the End of the Lane by Neil Gaiman

The Grey Bastards by Jonathan French

The Fairy Tales of Angela Carter

Murder Most Unladylike by Robin Stevens

The Ministry of Utmost Happiness by Arundhati Roy

You know what? Let’s just ignore this section and move on.  I’m going to attempt to do No Buy July with Asha from A Cat, a Book, and a Cup of Tea.  Wish us luck.# 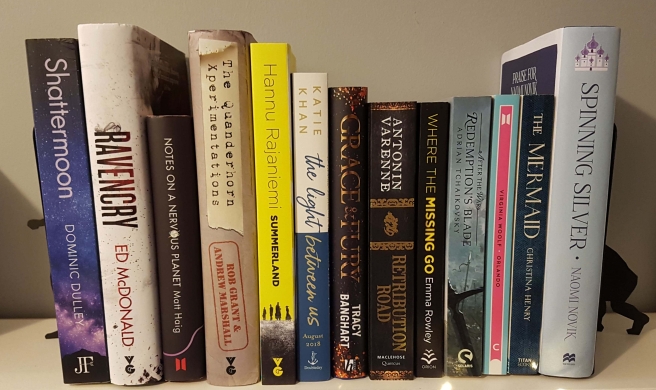 The Quanderhorn Xperimentations by Rob Grant and Andrew Marshall

The Light Between Us by Katie Khan

Where The Missing Go by Emma Rowley

Notes on a Nervous Planet by Matt Haig

The Mermaid by Christina Henry

Gracy and Fury by Tracy Bangheart

What a freaking great month for book post!  Can you believe all the great stuff that has come through my letterbox?  I’ve implemented this six-week policy for all my review copies — I have to read and ideally review them within six weeks of receiving them — and it’s going great so far.  I still have a long way to go before I read this pile down, but I am making progress!

July promises to be an amazing month.  Not only do I get to go on holiday again (!!), I’ll be meeting Becky Chambers twice, I’ll be going to an event that Orion is throwing in London, and YALC comes at the end of the month.  Reading?  Who has time for that?

How was the month of June for you?  Did you read anything great?  Did you buy any shiny new books?