I received a copy of this book from the American publisher in exchange for an honest review.  This review is spoiler-free.

I rarely review books that I DNF (did not finish), however I really wanted to talk about this one.  Why?  Because I’m so upset that it didn’t deliver.  Space Opera sounded like the absolute perfect book for me — it’s Hitchhiker’s Guide to the Galaxy meets Eurovision.  I wanted to love this book so badly, but it just didn’t work for me. 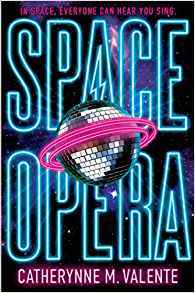 IN SPACE EVERYONE CAN HEAR YOU SING

A century ago, the Sentience Wars tore the galaxy apart and nearly ended the entire concept of intelligent space-faring life. In the aftermath, a curious tradition was invented-something to cheer up everyone who was left and bring the shattered worlds together in the spirit of peace, unity, and understanding.

Once every cycle, the civilizations gather for the Metagalactic Grand Prix – part gladiatorial contest, part beauty pageant, part concert extravaganza, and part continuation of the wars of the past. Instead of competing in orbital combat, the powerful species that survived face off in a competition of song, dance, or whatever can be physically performed in an intergalactic talent show. The stakes are high for this new game, and everyone is forced to compete.

This year, though, humankind has discovered the enormous universe. And while they expected to discover a grand drama of diplomacy, gunships, wormholes, and stoic councils of aliens, they have instead found glitter, lipstick and electric guitars. Mankind will not get to fight for its destiny – they must sing.

A one-hit-wonder band of human musicians, dancers and roadies from London – Decibel Jones and the Absolute Zeroes – have been chosen to represent Earth on the greatest stage in the galaxy. And the fate of their species lies in their ability to rock.

My reason for not finishing this book comes down to one major factor: the author’s style.  First things first, the writing just didn’t do it for me.  This was my first book by Valente so I’m not sure if this is a style she always uses or not, but it felt almost like she was using big words for the sake of using big words (if that makes any sense at all).  You know those guys on Reddit who are like, 14 years old and trying to make themselves sound smarter by using words they found in their SAT prep book but end up looking foolish instead?  That’s what this is, but in book form.  I just do not mesh with that style of writing at all — it feels very try-hard and got very irritating very quickly.

Due in part to the writing style, the humor didn’t quite hit the mark for me either. Remember that 14-year-old Redditor?  He’s now trying to be Douglas Adams and, well, not succeeding.  No one can really be Douglas Adams — it’s a miracle that Douglas Adams managed to be Douglas Adams.  Where Hitchhiker’s Guide to the Galaxy was on the right side of that ‘ridiculously funny or not at all’ line, Space Opera was not.  Most of the jokes fell so flat — there were a couple of moments in which I actually physically cringed.  There were a few lines I liked, but overall I just didn’t buy into the humor at all.

The last thing that didn’t work for me makes me the most angry.  This was the plot versus exposition balance.  Essentially, what plot?  I got 32% into this book, that’s about 100 pages.  By that point the plot should be well underway.  Instead we had maybe a couple pages of plot and background story for our main characters and pages upon pages of nonsense about alien species.  This book committed one of the worst crimes in science fiction and fantasy: the dreaded info dump.  Mostly in that the entire book was a massive, unnecessary info dump.  The world building is ambitious, and I give her a lot of credit for that, but she seemed to be much more interested in creating zany alien species and showing off how smart she was than giving us the glorious Eurovision-in-space book that we were promised.

Guys, I wanted to love Space Opera so badly and it’s pretty obvious that I was let down.  What had the potential to be a ridiculously fun rock and roll romp through space was a massive flop.  Of course, my issues with the book stem from the fact that I just didn’t mesh well with her style at all.  Most reviewers seem to be raving about this book, so I encourage you to pick it up if you’re curious.  I think this book with either click with you or wont — there doesn’t seem to be much middle ground here.

Want to give Space Opera a try?  You can find it at the following sites (affiliate links):

Have you read Space Opera?  What did you think?  Is it in your TBR?  Let me know!