I received a copy of this book in exchange for an honest review.  This review is spoiler-free.

When I requested a copy of Planetfall, I assumed I was going to get a standard ‘humans colonize a planet, things go wrong’ science fiction book — which is great, don’t get me wrong.  However, Planetfall turned out to be one of the most unexpected, brilliant, and compelling sci-fi books I’ve ever read. 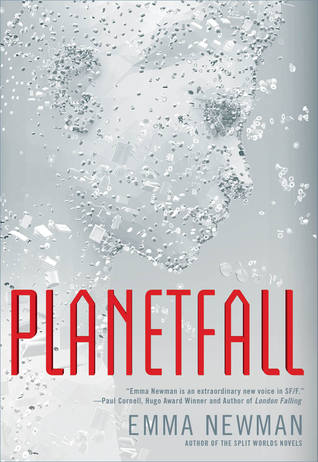 Renata Ghali believed in Lee Suh-Mi’s vision of a world far beyond Earth, calling to humanity. A planet promising to reveal the truth about our place in the cosmos, untainted by overpopulation, pollution, and war. Ren believed in that vision enough to give up everything to follow Suh-Mi into the unknown.

More than twenty-two years have passed since Ren and the rest of the faithful braved the starry abyss and established a colony at the base of an enigmatic alien structure where Suh-Mi has since resided, alone. All that time, Ren has worked hard as the colony’s 3-D printer engineer, creating the tools necessary for human survival in an alien environment, and harboring a devastating secret.

Ren continues to perpetuate the lie forming the foundation of the colony for the good of her fellow colonists, despite the personal cost. Then a stranger appears, far too young to have been part of the first planetfall, a man who bears a remarkable resemblance to Suh-Mi.

The truth Ren has concealed since planetfall can no longer be hidden. And its revelation might tear the colony apart…

Planetfall is a deceptively quiet novel.  What I really loved about it is that the plot seems to be almost secondary to Ren’s experiences.  What we get in this book is an in-depth study of a particular character. Ren is a damaged person.  Something has happened to her, there is a secret she is keeping, and we don’t have the whole story.  But as we stay in her mind, we slowly tease apart her back story. This is an incredible book for mental health rep, although I wont say exactly what that rep is, and Newton does a fantastic job of creating a character with anxiety.  The pressure Ren puts on herself, the panic she feels, the way she pushes down and buries frightening thoughts, the distancing of herself from her peers, everything is just characterised so perfectly. Just a word of warning for those with anxiety issues, it is done so well that it actually began to make me nervous while reading it.

Although the actual plot isn’t the main focus in my mind, it is still incredibly compelling and thoughtful.  When Sung-Soo arrives at the colony, he triggers a huge change among the colonists and within Ren. Everything changes after his arrival, for better or for worse.  I love his own background story and the slow reveal of what happened during planetfall 22 years ago, as the two are closely tied together. He represents so much of what the colonists are not — he has never been around technology, he doesn’t understand simple references to life on earth, and he is incredibly in touch with the planet and all it has to offer.  Although he is human, he is almost an alien species to them.

The setting and the world building are wonderful in this book.  Although you don’t get the full story of what happens on Earth and why Suh-Mi and the crew decided to leave, there are indications that things were beginning to fall apart.  Our colonists haven’t had contact with Earth in decades, so their ignorance is ours as well.

We, as readers, know a lot more about this planet they’ve colonised.  I was particularly fascinated by God’s city, the bizarre, living city that Suh-Mi sought out on their arrival.  It is so strange, mysterious, and compelling. The entire worldbuilding of Planetfall can be described as such: there’s enough explained to give the reader an understanding, but enough unexplained to make the reader curious for more.  I absolutely loved it.

I think Planetfall is a book that could easily slip through the cracks of all the major SFF releases in 2018, but if you’re a science fiction fan you should really do yourself a favour and keep your eye out for this book.  It is a fast read that is compelling, mysterious, beautiful, and heartbreaking.

Want a copy of Planetfall?  You can pick up a copy here (affiliate links):

Have you read Planetfall?  What did you think?  Is it in your TBR?  Let me know!