Welcome to my stop on the blog tour for Simon Ings’  new book The Smoke!  This twisting tale of literary fiction is sure to grab you from the first pages.  Told in the second person, it’s a bold and unique take on dystopian fiction and alternate history. 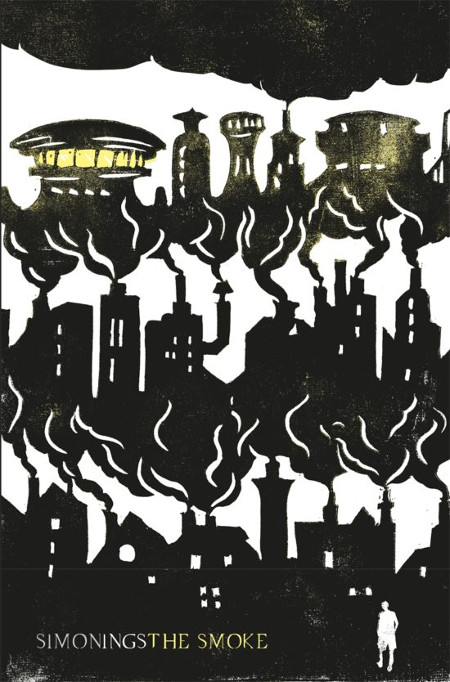 Simon Ings’ The Smoke is about love, loss and loneliness in an incomprehensible world.

Humanity has been split into three different species. Mutual incomprehension has fractured the globe. As humans race to be the first of their kind to reach the stars, another Great War looms.

But soon enough you will find yourself in the Smoke again, drawn back to the life you thought you’d left behind.

You’re done with love. But love’s not done with you.

The paper is headed ‘Gurwitsch Subscription Hospital’ with an address in Queen Square in Holborn, London. It is the hospital your mother attended when she first took the rays. The letterhead is fancifully antique, but below, the details of an upcoming appointment – B-P ‘therapy’ and a date nine months old – have been dashed off by an ink-starved dot-matrix printer.

The ‘BP’ in BP therapy stands for biophotonics. The biophotonic ray is a cytological phenomenon discovered by the embryologist Alexander Gurwitsch. For that reason, it’s often called the ‘Gurwitsch ray’ or G-ray.

Gurwitsch, a Munich graduate and a Russian Jew, was born towards the end of 1874, the year of the Yellowstone Eruption. So far as biographers can ascertain, young Gurwitsch was the only member of his family to survive the global ten-year winter which followed North America’s fiery end. And thanks to the quick and generous actions of the family’s lawyer, he thrived.

Contemporary memoirs describe a bright boy, obsessed with colour. This was no uncommon obsession back then. Yellowstone’s profound effect on the atmosphere

of Northern Europe, especially at dawn and dusk, fuelled a short-lived generation of consumptive and hungry artists. Gurwitsch’s first ambition was to join their starving ranks, and this, unusually, met no opposition from his patron. But he was no good, and after two busy yet barren years, Gurwitsch returned from the soup kitchens of Paris, his paintings and diaries consigned (ritually, and with a certain amount of drinking) to his friends’ fireplaces. He later quipped that his art had served the essential function of warming hands more talented than his own.

In starving Saint Petersburg, where a ban on domestic cats had brought forth rats the size of dogs, in rooms heavy with the smoke from burning furniture and even floorboards, the young Gurwitsch set about his second career. He became, of all things, an embryologist, fascinated by the mysteries of development.

Why do things grow the way they do? Why is growth such an orderly business? Especially: how does every part of the expanding foetus know at what rate to grow? At

every stage of life, the foetus is exquisitely symmetrical, its internal organs developed in a manner perfectly suited to support its periphery. How is this possible? What constrains and encourages this roiling ball of fast-dividing cells to fashion itself into so intricate a form?

There were at the time two broad answers to this question. Gurwitsch’s lecturers were wont to throw up their hands and talk about the existence of pre-existing ‘templates’. But Gurwitsch, a young liberal, radicalised in Paris and hiding seditious German pamphlets behind his stove, preferred the more radical alternative. This hypothesised that the cells of the foetus actually communicate.

Gurwitsch’s militant materialism and powerful, disciplined imagination marked him out as a radical. He was arrested, served out a short period of exile, and maintained a secret correspondence with political and scientific figures in Vienna, London and Berlin. There was a revolution going on in the life sciences quite as

profound as the revolution brewing among the trades unions of Paris and London, and Gurwitsch’s letters offer a fascinating, if bewildering, glimpse into years during which scientific and political questions were virtually indistinguishable.

The trouble was, Gurwitsch couldn’t get the painterly monkey off his back. He had all the makings of a liberal martyr, a Duma minister, a scientific entrepreneur like Koltsov or Vavilov, but, one by one, all the key public moments passed him by. His time became entirely absorbed by the conundrums of colour. Pigments and spectra. Constructed colour. Colour mixes. Colour wheels. Goethe’s anti-Newtonian maunderings. John Clerk Maxwell’s mistakes. The nonsense of the primaries. The tapestries of Le Blon. Canvases of Signac and Seurat. He wasn’t, by a long chalk, the only Russian intellectual to succumb to the temptations of ‘internal exile’, using personal study as a shelter from the political chaos outside. Read any short story by Turgenev. Attend any play by Chekhov. And so his tale might have ended: another one of Russia’s lost generation of Francophile pantaloons.

It was in the Collège de France, working down the corridor from Pierre and Marie Curie, that Gurwitsch achieved the breakthrough that would, for better and for worse, immortalise his name: the Gurwitsch ray. A colour all his own!

What he had in fact found was a weak ultraviolet pulse, passing from cell to cell. Living tissues emit light. This was a significant finding, but not unexpected. What was unexpected – indeed, revolutionary – was Gurwitsch’s leap of faith: that it was this self-generated light, this ‘biophotonic ray’, that was orchestrating development.

Why do birds give birth to birds, and dogs to dogs, and cats to cats? Because, said Gurwitsch, every species emits its own special ray.

Easy to say; harder to prove. Anyway, Gurwitsch’s discovery had to join the queue. There were altogether too many newfangled rays abroad. Every ambitious physicist in middle Europe was touting a ray of some kind. X-rays, N-rays. It took time to sort the wheat from all this hopeful chaff.
But in the end—!
At an international conference held at the Ukrainian animal breeding station at Askania-Nova, on the eve of the war that would consume a generation and irradiate a continent, Alexander Gurwitsch was ready to declare, not only that the biophotonic ray was real, but that he had already taken the first steps to control it. Biophotonics, he declared, would give the next generation the ability ‘to sculpt organic forms at will’ – no small promise to make to men and women scarred, as Gurwitsch was scarred, by memories of the ten-year Yellowstone Winter.

‘In the near future, man will expose foetal material to a finely tuned and targeted ultraviolet ray, synthesising such forms as are entirely unknown in nature,’ he declared. ‘Biological synthesis is becoming as much a reality as chemical.’

This was Gurwitsch’s promise – nothing less than ‘the planned and rational utilisation of the living resources of the terrestrial globe’.

No one standing and applauding him that day had the slightest idea how badly this was going to go. The speciation of mankind. The Great War and its battlefields. The all-too-many undead.

Simon Ings is the author of eight previous novels (some science fiction, some not) and two works of non-fiction, including the Baillie Gifford longlisted STALIN AND THE SCIENTISTS. His debut novel HOT HEAD was widely acclaimed. He is the arts editor of New Scientist magazine and splits his time between a sweltering penthouse in Dubai (not his) and possibly the coldest flat in London.

Today brings about the end of the blog tour for The Smoke, but never fear!  You can check out the previous posts on the following blogs. 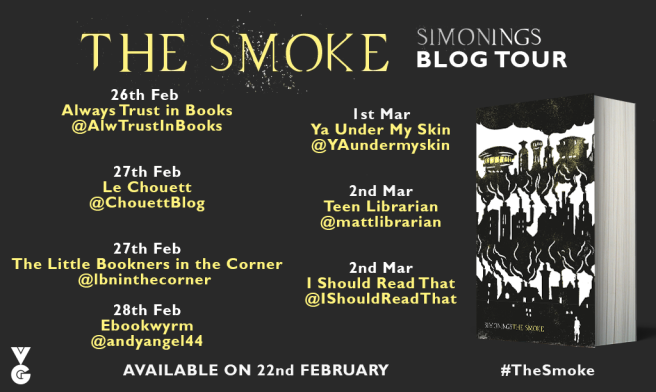 3 thoughts on “Blog Tour: The Smoke by Simon Ings [extract]”