The Diviners by Libba Bray

The Diviners is a book that has been on my radar for absolute ages.  It was brought to my attention again thanks to the book blogging community, and I’m so glad I picked it up.  It is a difficult one to rate, though.  I really loved it — seriously, it has been one of my most enjoyable reading experiences I’ve had in a long time — but I don’t think it’s a perfect book.  In fact, I feel like there’s a lot of room for improvement. 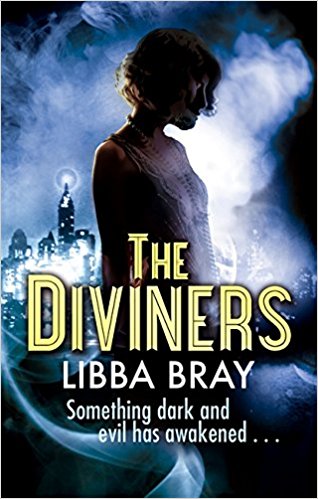 It’s 1920s New York City. It’s flappers and Follies, jazz and gin. It’s after the war but before the depression. And for certain group of bright young things it’s the opportunity to party like never before.

For Evie O’Neill, it’s escape. She’s never fit in in small town Ohio and when she causes yet another scandal, she’s shipped off to stay with an uncle in the big city. But far from being exile, this is exactly what she’s always wanted: the chance to show how thoroughly modern and incredibly daring she can be.

But New York City isn’t about just jazz babies and follies girls. It has a darker side. Young women are being murdered across the city. And these aren’t crimes of passion. They’re gruesome. They’re planned. They bear a strange resemblance to an obscure group of tarot cards. And the New York City police can’t solve them alone.

Evie wasn’t just escaping the stifling life of Ohio, she was running from the knowledge of what she could do. She has a secret. A mysterious power that could help catch the killer – if he doesn’t catch her first.*

The setting of The Diviners is absolute perfection.  As a disgruntled ex-New Yorker (you couldn’t pay me to live there ever, ever, ever again), I still really love the nostalgia that books set in New York bring me.  And this is a great New York book.  From those humid late-summer-early-fall evenings and the bustling and noisy nights, to the monuments the the city’s great past and that sense that your great destiny is just around the corner, Libba Bray really captures the spirit of New York City. There are long passages that twist and meander through the streets of the city — those were some of my favourite bits of the book.  Take that and set it in the midst of Prohibition and you have a setting that makes me drool.  It’s just so atmospheric and I loved it.

I know that opinions on this book are quite mixed and that probably has a lot to do with our heroes.  There’s a huge cast of characters, and it seems like it only gets bigger in later books.  Because of this, I am not sure enough time was dedicated to certain characters.  Our main character is Evie — a party girl from Ohio who is the daughter of Temperance parents.  Bad combination, eh?  Evie is sent to New York to live with her uncle after she scandalises herself (although I have to wonder, who sends flapper to New York and hopes she behaves herself??).  I can really see her being a character that makes or breaks the book for a reader.  She’s selfish, naive, foolish, and an all-around terrible person.  Me, I love reading about this kind of heroine.  She’s the kind of female character I love because she’s so far from perfect.  Her flaws make her infuriating, but fascinating.  I couldn’t help but root for her, but I can easily see her being too annoying and selfish for many readers.  Despite the large cast, Evie is really the character who can make or break the story for a reader.

If I tried to go into every character in this book we’d be here for hours, so I’m going to skim over some stand-outs.   Characters like Theta, Henry, Memphis, and Will all have the potential to be absolutely incredible (except Theta, who is already incredible and I want/need to know more about her.  Can she get her own book? Please?), but we spend so little time with them that I just feel like I don’t know them at all.  Jericho, Sam, and Mabel are all very “meh” for me, despite us knowing more about them than the other listed above.  Given their backstories, I should have loved Sam and Mabel but I didn’t.  Jericho’s backstory was just a little too odd and out of place for me, and I just felt nothing for him.  See what I mean about a huge cast?

The other two main issues I have with the book are equally major ones.  I didn’t like the villain and I didn’t like the romance — yikes.  Let’s start with the villain — I had such high hopes for them!  Because the book is billed as paranormal/occult, I really hoped that they would be so cool, creepy, and terrifying.  But they just felt so lacklustre.  I think that, again, this is the result of too many characters — the villain really gets shuffled off to the side.  I could go into more detail here, but I won’t because of spoilers.

Finally, I just didn’t get the romance. This is not necessarily because the characters in the love triangle were boring or lacklustre.  I feel like the problem here is editing — it started going in one direction and then out of nowhere did something completely different!  It was like there were 20 pages or so missing from the book.  There’s so little emotional build-up and foreshadowing and I ultimately didn’t care.

Despite all of these bad things I’ve said, I actually really liked The Diviners!  I told you it was a funny one to review.  If it ticks your boxes with the 1920’s New York setting, the difficult female character, and occult, murdery goodness, then you’re probably going to love this.  I really, really enjoyed it — in fact, I’ve already ordered up the second and third books — but it didn’t quite live up to its potential.  However, I’m planning to marathon the series — I cannot wait to see where it goes.

Fancy picking up a copy of The Diviners?  You can find it at the following online stores (affiliate links):

Have you read The Diviners?  What did you think?  Is it in your TBR?  Let me know!

10 thoughts on “Book Review: The Diviners by Libba Bray”