Welcome to my stop on The Toymakers blog tour!  I’m so pleased to be doing something a little different with this post.  Below, you’ll be able to read the opening pages of this marvellous and magical new book.  With just the right hint of childlike wonder and magic, Robert Dinsdale’s writing is guaranteed to ensnare the senses.

Do you remember when you believed in magic?

It is 1917, and while war wages across Europe, in the heart of London, there is a place of hope and enchantment.

The Emporium sells toys that capture the imagination of children and adults alike: patchwork dogs that seem alive, toy boxes that are bigger on the inside, soldiers that can fight battles of their own. Into this family business comes young Cathy Wray, running away from a shameful past. The Emporium takes her in, makes her one of its own.

The Emporium opens with the first frost of winter. It is the same every year. Across the city, when children wake to see ferns of white stretched across their windows, or walk to school to hear ice crackling underfoot, the whispers begin: the Emporium is open! Christmas is coming, and the goose is getting fat . . .

If, at a certain hour on a certain winter night, you too had been wandering the warren between New Bond Street and Avery Row, you might have seen it for yourself. One moment there would be darkness, only the silence of shops shuttered up and closed for business. The next, the rippling snowflakes would part to reveal a mews you had not noticed before – and, along that mews, a storefront garlanded in lights. Those lights might be but pinpricks of white, no different to the snowflakes, but still they would draw your eye. Lights like these captivate and refract the darkness. Lights like these can bewitch the most cynical of souls.

Watch out, because here one such soul comes, hurrying out of the night.

He is a barrel of a man, portly to those who would look on him kindly, corpulent to those who would not. Outside the Emporium, he stops and gazes up, but this is not the first time he has been enchanted by these lights, so he steps through the door to be met by the whirlwind smells of cinnamon and star anise. Ribbons of navy blue stream apart and, in the vaulted ceiling above, miniature bells tinkle, spiriting up memories he has tried hard to forget: sleigh rides through parks too painful to remember, wassailing on the village green, Christmases in better, more innocent times.

Come, go in after him. You would not be the first. Children are already tugging on their parents’ hands; a pair of young lovers hurry to make secrets of their gifts to one another; an old man unwinds his scarf as he hobbles in, if only to feel like a boy again. If you follow after, there will be much to see.

He is already disappearing into the throng when you come through the doors. What had seemed a tiny shop from without reveals itself to be a grand labyrinth within. At your feet a miniature locomotive glides past on rails set into the floor and, beyond that, each aisle explodes into a dozen others, floors stacked upon floors like the illusion of a master mathematician. Shoppers disappear along one aisle, only to reappear, bewildered, on the galleries above.

It would be easy to get lost in a place like this, but the man we are following knows the way. Alone among the shoppers, he does not stand to gawk at the displays – and nor must we. There will be time for lingering later. For now, do not let yourself get distracted by the bears whose eyes follow you from every shelf, nor the tin soldier who stands to attention as you pass (he is only playing a parlour trick to tempt you into taking him home). Forget, for a moment, the whinnying of the hobby horses eager to be ridden. If you see a doorway through which there lies a wintry grove bedecked in lights, do not give it a second glance. Keep your eyes on the man in front, for he is almost at his destination. Come closer now, that we might listen. 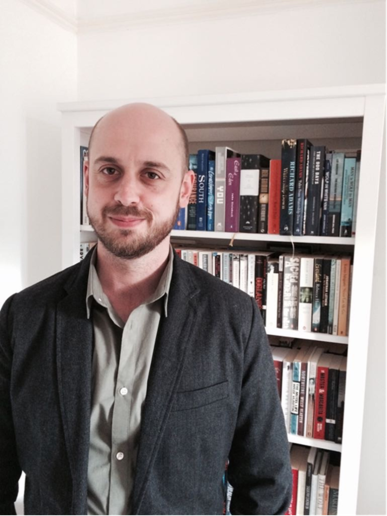 Robert Dinsdale was born in North Yorkshire and currently lives in Leigh-on-sea. He is the author of three previous critically acclaimed novels: The Harrowing, Little Exiles and
Gingerbread. He has a young daughter, and The Toymakers is a book he couldn’t have written without the experience of being a father for the first time. The idea for it came to him, almost fully-formed, in a toyshop with his daughter.

The Toymakers is his first venture into magic….

Fancy learning more about The Toymakers?  Don’t forget to catch the other stops on the blog tour for more magic!