The Seventh Decimate by Stephen Donaldson

I was sent a copy of this book in exchange for an honest review. This review is spoiler-free.

Stephen Donaldson is one of the kings of 80’s fantasy, however I had never read any of his books before.  When I was presented with an opportunity to read his newest book, The Seventh Decimate, I jumped at the chance. 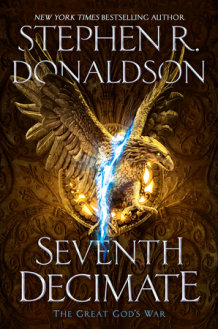 Fire. Wind. Pestilence. Earthquake. Drought. Lightning. These are the six Decimates, wielded by sorcerers for both good and evil.

But a seventh Decimate exists–the most devastating one of all…

For centuries, the realms of Belleger and Amika have been at war, with sorcerers from both sides brandishing the Decimates to rain blood and pain upon their enemy. But somehow, in some way, the Amikans have discovered and invoked a seventh Decimate, one that strips all lesser sorcery of its power. And now the Bellegerins stand defenseless.

Prince Bifalt, eldest son of the Bellegerin King, would like to see the world wiped free of sorcerers. But it is he who is charged with finding the repository of all of their knowledge, to find the book of the seventh Decimate–and reverse the fate of his land.

All hope rests with Bifalt. But the legendary library, which may or may not exist, lies beyond an unforgiving desert and treacherous mountains–and beyond the borders of his own experience. Wracked by hunger and fatigue, sacrificing loyal men along the way, Bifalt will discover that there is a game being played by those far more powerful than he could ever imagine. And that he is nothing but a pawn…*

I am very conscious of the fact that I’m coming at this book from the point of view of a modern fantasy reader.  While I adore older series like the Shannara books and Wheel of Time, I really like the direction that modern fantasy is going in.  That, namely, is moving away from a very male-focused narrative and focusing on more diverse settings and characters.  The Seventh Decimate very much has the feel of an 80’s fantasy book.  It’s full of nostalgia while being a completely new thing.  However that does mean it contains some of the more problematic themes of older fantasy novels.

The Seventh Decimate features a classic quest narrative — the character must go do A Thing, usually to save someone or something, and the plot follows their journey.  We follow Prince Bifalt, the eldest son of the king and heir to the throne of Belleger, in a quest to save his homeland.  Bifalt’s journey takes him from the plains to the desert to the mountains, much of it unexplored.  I happen to love a good quest plot — we often get to see characters grow as they leave their comfort zone and explore new lands and meet new people.  Bifalt must challenge everything he has ever known in order to find the repository that can save his people from Amika’s sorcery.  But does he grow and evolve as a character?

In short, no he does not.  Bifalt begins the novel as a very prejudiced man — his absolute, blind hatred of the Amikans is deeply rooted in centuries of war.  By the end of the book, he remains very much the same person, full of wrath and anger.  He has absolutely no character arc and this really causes problems for the story.  I kept waiting for that moment in which he becomes a better man or his prejudice against the Amikan people.  Much is revealed about the conflict, yet Bifalt is like a brick wall against this knowledge.  He has a couple of moments in which you think he’ll change, but he quickly shuts those moments down. There’s a great deal I can say about him and further plot points, however I’m going to avoid them due to spoilers.  I will say that his hardheadedness does not show strength of character.  Rather, he is the kind of brutish and stubborn character that is usually reserved for a villain rather than a hero.

As mentioned above, The Seventh Decimate does contain many themes often seen in older fantasy novels, but less so today.  Unlike a solid quest narrative, these are not always a good thing.  There is a lot of chest thumping and shouting about destiny to the wind and some questionable foreign cultures.  However I found the most glaring thing was the lack of women.

There are basically no women in this book.  There are two who show up for very small roles later on, one of which is highly sexualised and does lots of eyebrow wiggling and lip licking.  Only one woman is really mentioned in the first half of the book, and that’s the mythical woman who’s marriage to one ruling brother rather than the other was supposed to have caused the whole Amikan/Belleger conflict.  The first time a woman actually speaks is halfway through the book.

Now, in a time in which the stereotype of fantasy being solely for teenage boys has largely been rejected and a huge portion of the fantasy audience happens to be female, The Seventh Decimate stands out as being a little behind the times.  Many of the hugely popular fantasy novels, both adult and young adult, written today are far more diverse in terms of gender.  There are so many more roles for women in these books that a serious lack of female characters really stands out.  I think it’s a real shame that The Seventh Decimate has an air of the ‘boys club’ about it — I think a lot of readers will be turned away because of that fact.

Overall, The Seventh Decimate is a fun and fast read, but has a lot of glaring problems.  Quite frankly, it just doesn’t do enough to entrap a modern reader.  If I picked it up in a bookstore, I would probably have been surprised to see it was published in 2017 rather than 1986.  I think it’s a good bare bones of a story, but would need a lot of work.  I wouldn’t say I hated it, I just think it’s a shame it wasn’t better.  Based on this book, I wouldn’t continue the series or read Donaldson’s previous books.

Have you read The Seventh Decimate or any of Donaldson’s other novels?  If you have, I would love to know what you think!  I’d really love to know how this book compares to his previous novels.  Let me know!

You can buy The Seventh Decimate here (affiliate links):

5 thoughts on “ARC Review: The Seventh Decimate by Stephen Donaldson”