Daughter of the Burning City by Amanda Foody

I received a digital copy of this book in exchange for an honest review, however I also bought an early sale copy too.  Neither of these facts affect my opinion.  This is a spoiler free review.
Daughter of the Burning City is the much-hyped debut novel from Amanda Foody.  I was approved to read this book a few months back but was holding off for some reason.  Good reviews kept pouring in and when I saw early copies on sale at YALC, I had to have a physical copy.  I’m so pleased to say that I was surprised by Daughter of the Burning City in the best way possible! 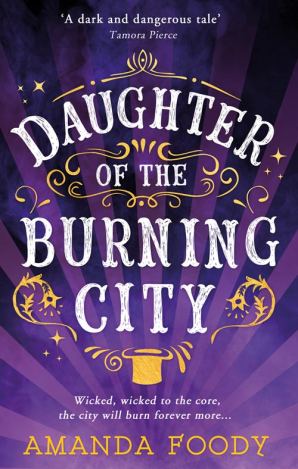 Sixteen-year-old Sorina has spent most of her life within the smoldering borders of the Gomorrah Festival. Yet even among the many unusual members of the traveling circus-city, Sorina stands apart as the only illusion-worker born in hundreds of years. This rare talent allows her to create illusions that others can see, feel and touch, with personalities all their own. Her creations are her family, and together they make up the cast of the Festival’s Freak Show.

But no matter how lifelike they may seem, her illusions are still just that—illusions, and not truly real. Or so she always believed…until one of them is murdered.

Desperate to protect her family, Sorina must track down the culprit and determine how they killed a person who doesn’t actually exist. Her search for answers leads her to the self-proclaimed gossip-worker Luca, and their investigation sends them through a haze of political turmoil and forbidden romance, and into the most sinister corners of the Festival. But as the killer continues murdering Sorina’s illusions one by one, she must unravel the horrifying truth before all of her loved ones disappear.*

There was just so much for me to love about this book.  From the sumptuous description of the world to the characters and their abilities, everything about this book just worked.  The Gomorrah Festival was such a wonderful setting.  Foody’s writing makes the Festival come to life as the reader’s mind is filled with its the sights, sounds, tastes, and smells.  The descriptions of the food in particular were excellent – and kept making me hungry.  It is so cliché to say so, but it really did feel like the Festival was a character in the book.  So much of the wonder and twisting of reality was complimented by the setting.

The Gomorrah Festival is the perfect setting for the mystery plot that takes place.  When one of Sorina’s illusions is murdered, the home she has always known no longer feels safe.  When she begins to investigate, she enters areas of the Festival – particularly the Downhill area – that she has never ventured into.  So in a way, we are seeing it for the first time along with Sorina, which was an effective way of introducing us to her, the Festival, and the magic that fills her world.

I really loved the characters in Daughter of the Burning City.  Of course we spend most of our time with Sorina, whose illusion-work is the reason a number of the characters exist.  She is content with her life and her family of illusions.  She’s unusual not only for her illusion-work abilities, but also for the fact that she has no eyes.  Although she is still able to ‘see’, much of her identity is wrapped up in this feature and the masks she wears reflect her feelings at the moment.  Sorina is a strong character, yet realistic.  She’s dedicated to her family, who she treats equally despite knowing that they’re ‘not real’.  When it comes time to investigate, her reality is twisted and she doesn’t know what to believe, but she still acts with her family’s best interest in mind and makes tough choices.  I really respected her as a character.

The other characters in the book were just as fascinating as Sorina.  From Luca, the charming and rapidly-healing gossip-worker, to Villiam, her kindly father figure and proprietor of the Festival who will teach her everything he knows, these secondary characters don’t fade into the background.

The other members of the freak show were fantastic and fascinating as well.  They were more than their abilities and outward appearance – each had their own lives and personalities.  Foody did such a great job making sure that they had defined personalities, and it really paid off.  You feel their fear, their sense of loyalty, and their connection as a family.  The illustrations peppered throughout the books not only enhance them as characters, it adds to our fear when we don’t know who will be safe and who will be fall victim to a killer.

There are so many other things I can say about this book and it’s plot, but you should really discover them on your own.  Read this book – it is so refreshing in its inventiveness.  The romantic subplot enhances the story rather than dominates it.  The world-building is wonderful and the magic system is fabulous.  You cannot trust your eyes until the very end.  Daughter of the Burning City kept me guessing – I thought I had it all figured out, but I did not – and was such an entertaining read.  I highly recommend it!

Have you read Daughter of the Burning City?  What did you think?  I’m open to spoilery discussion!

6 thoughts on “ARC Review: Daughter of the Burning City”