Daughter of Smoke and Bone by Laini Taylor

I initially avoided Daughter of Smoke and Bone because, well, I really hated the US cover.  Shallow?  Absolutely.  However I recently read Taylor’s newest novel, Strange the Dreamer, and was swept away by her marvellous writing skills.  I decided to backtrack and dive into her best known series. 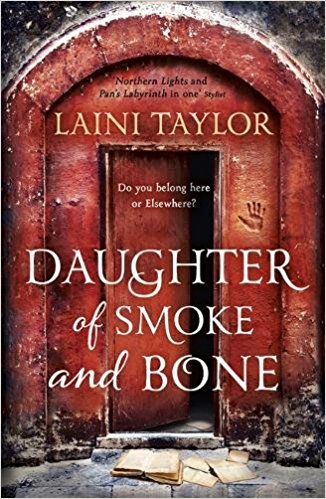 The note was on vellum, pierced by the talons of the almost-crow that delivered it. Karou read the message. ‘He never says please’, she sighed, but she gathered up her things.

When Brimstone called, she always came.

In general, Karou has managed to keep her two lives in balance. On the one hand, she’s a seventeen-year-old art student in Prague; on the other, errand-girl to a monstrous creature who is the closest thing she has to family. Raised half in our world, half in ‘Elsewhere’, she has never understood Brimstone’s dark work – buying teeth from hunters and murderers – nor how she came into his keeping. She is a secret even to herself, plagued by the sensation that she isn’t whole.

Now the doors to Elsewhere are closing, and Karou must choose between the safety of her human life and the dangers of a war-ravaged world that may hold the answers she has always sought*

I am conflicted about Daughter of Smoke and Bone.  There were parts I absolutely loved and parts I really did not like.  I think the easiest way to review this book is to break it down into parts.

It took me a few chapters to get into the plot, but once Karou’s story really got going, I began to enjoy it. She had me with her trudging around doing errands – it was the first time she felt like a real, relatable character.  I was invested in her and what was going on around her.  I liked her friends and the life she was living between worlds.

It’s hard to discuss the plot without spoilers, but the last 25% of the book really went downhill for me.  If you’ve read it, you know exactly what part I’m talking about.  Between the time I drafted this review and am posting it I’ve seen loads of reviews criticising this same thing, so I know I am not alone.  The ending – and I mean the very end, as in the last page – is phenomenal though and seems to promise things will get back on track with Karou in Days of Blood and Starlight.

As expected, Taylor’s world building is perfection.  She manages to take ordinary locations across the globe and bring them to life – you can practically see and smell the markets of Marrakesh, the streets of Paris, or the quiet cafés of Prague.  Then, of course,  there’s the fantastical locations – Brimstone’s shop and Eretz in general.  The shop is like something out of my wildest daydream.  She makes it sound both incredibly enchanting and horrifying at the same time.  Brimstone’s trade in teeth and wishes was what got me hooked and kept me interested when things started to flag.  I’m really hoping to get more of a glimpse at Eretz in the sequel.

It took me awhile to warm to Karou.  I got major manic pixie dream girl vibes from her at first.  I get frustrated with the totally unique and quirky girl with funky coloured hair and lots of tattoos because ironically, it is a type of character that is completely overdone.  Throw in the fact that she’s an art student in Prague and I was almost rolling my eyes.  But once we stopped being told how unique Karou was and Taylor showed us her thoughts and actions, I really grew to like her.  She is strong and vibrant (and it’s not just her blue hair).  Things got problematic for me again later on in the book when the romance got thrown in (see the next part) and once again, the last 25% of the book really put a damper on things.  Karou spends all this time growing on me and then boom, she temporarily disappears from the story?  Boo.

I love many of the background characters from the first 75% of the book.  Zuzana is absolutely wonderful and their friendship glows, especially in a genre in which female friendship seems to be such a rare thing.  The chimera in the shop, especially Issa and Brimstone, were fascinating and wonderful.  Kaz is such an ass, but again their relationship felt so real.  How many of us have /know someone who has fallen for the asshole guy?  How many of us would have taken the itchy revenge against him?  Contrasting these characters, pretty much everyone introduced in the last 25% are so incredibly dull and forgettable.  This is particularly surprising because they’re the most fantastical of all.  I just couldn’t connect or sympathise with anyone.  This is really hard to do without spoilers, guys.

Here is where we get to the meat of my issues with Daughter of Smoke and Bone.  I’ve mentioned above that Karou is a stong, independent, and lovely character.  This all changes as soon as Akiva, the love interest, is introduced.  As soon as he comes into play, Karou loses everything that makes her a great character.  Her strength, colourfulness, playfulness, and delightful snark go out the window and she becomes just…floppy.  I was so disappointed in her.  She’s that friend who begins dating her new boyfriend and becomes so completely engrossed in him that you can’t stand hanging out with her anymore.  Karou had to prove her worth to me – had to prove that she was more than just a manic pixie dream girl that had nothing interesting about her except her blue hair – and I feel like the character I grew to like so much was snatched away by a boy.  To be fair, the intensity of their relationship is explained away, but that just didn’t do it for me.  I want my female characters to be strong and interesting regardless of their romance – think Amani in Alwyn Hamilton’s Traitor to the Throne.  I ended up disliking Akiva all the more because of this.  And to be fair, all that Akiva has going for him at this point is the fact that he’s hot and broody.  Great.

So regardless of ending on an angry, ranting note, Daughter of Smoke and Bone is worth a read.  It has its ups and downs, but they pretty much balanced out for me.  I’ve already bought the sequel and am looking forward to seeing how Karou’s story progresses.  You should absolutely read this book if you’re a fan of gorgeous world building and lush fantasy fiction, but beware the pitfalls of instalove and mad hot angels.

Have you read Daughter of Smoke and Bone?  What did you think?  Want to have a spoilery discussion?  Let me know!

10 thoughts on “Review: Daughter of Smoke and Bone”