TBR Thursday is one of my favorite weekly posts from Bionic Book Worm’s lovely blog, so I thought I’d try my hand at it.  If you aren’t following her yet, well, you really should be.  Not only does she do great reviews and bookish posts, she’s an all-around lovely person.  You can find her blog here!  All credit for this idea and the stunning TBR Thursday graphic go to her!

I’m starting up a ‘read everything in the flat before you go out and buy more books, you fool’ initiative, much to my fiance’s delight.  I definitely have a book-buying problem and starting this blog has definitely made it worse.  So I’m hoping that TBR Thursday will help me sort through my shelves and get me excited to read some of my older books that are gathering dust.

Crossroads of Twilight by Robert Jordan

In the tenth book of The Wheel of Time from the New York Times #1 bestselling author Robert Jordan, the world and the characters stand at a crossroads, and the world approaches twilight, when the power of the Shadow grows stronger.

Anyone who knows anything about the Wheel of Time series is chuckling at me from behind their hands at this.  A 14-book series and the granddaddy of modern fantasy, reading the series is a huge undertaking.  And, of course, there’s the dreaded book 8-10 slump.  If you thought A Feast for Crows and A Dance with Dragons were disappointing, Wheel of Time fans scoff at you.

I’m at the very tail end of that slump with Crossroads of Twilight, which is according to Wheel of Time fans, one of the worst in the series.  I struggled so hard with Winter’s Heart, the ninth book, and I’m so not looking forward to reading Crossroads.  I desperately want to finish the series though because it apparently improves dramatically, so I need to buckle down and just read it.  Ugh.

Humanity has colonized the solar system – Mars, the Moon, the Asteroid Belt and beyond – but the stars are still out of our reach.

Jim Holden is XO of an ice miner making runs from the rings of Saturn to the mining stations of the Belt. When he and his crew stumble upon a derelict ship, the Scopuli, they find themselves in possession of a secret they never wanted. A secret that someone is willing to kill for – and kill on a scale unfathomable to Jim and his crew. War is brewing in the system unless he can find out who left the ship and why.

Detective Miller is looking for a girl. One girl in a system of billions, but her parents have money and money talks. When the trail leads him to the Scopuli and rebel sympathizer Holden, he realizes that this girl may be the key to everything.

Holden and Miller must thread the needle between the Earth government, the Outer Planet revolutionaries, and secretive corporations – and the odds are against them. But out in the Belt, the rules are different, and one small ship can change the fate of the universe.

You may notice I’ve taken the copy from the first book, Leviathan Wakes.  I didn’t want any spoilers for the first two books here because it’s such a great series and you should seriously read it!

Abaddon’s Gate is the third book in The Expanse, an amazing series of science fiction novels that have been turned into a TV show by SyFy.  I loved the first two books and have had this one sitting on my shelf for ages.  I have a tenancy to not read books in a series back to back because I burn out really quick, but of course this means that I get distracted and it takes me ages to finish a single series.  I really do love The Expanse, so I need to get back to it! 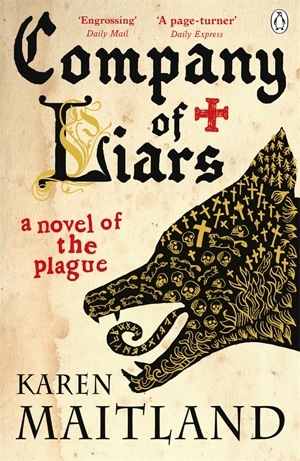 A Company of Liars by Karen Maitland

The year is 1348. The Black Plague grips the country. In a world ruled by faith and fear, nine desperate strangers, brought together by chance, attempt to outrun the certain death that is running inexorably toward them.

Each member of this motley company has a story to tell. From Camelot, the relic-seller who will become the group’s leader, to Cygnus, the one-armed storyteller . . . from the strange, silent child called Narigorm to a painter and his pregnant wife, each has a secret. None is what they seem. And one among them conceals the darkest secret of all–propelling these liars to a destiny they never saw coming.

I absolutely love historical fiction, but haven’t been reading much of it lately.  You may have seen me mention this book several times over the past couple of weeks – my lovely co-worker lent it to me months ago and I haven’t read it yet!  It’s one of her favorites and I trust her opinion, so I’ve got to get going on it.  It sounds absolutely fantastic!

Blood Sisters: The Women Behind the War of the Roses by Sarah Gristwood

The events of the Wars of the Roses are usually described in terms of the men involved; Richard, Duke of York, Henry VI, Edward IV and Henry VII. The reality though, argues Sarah Gristwood, was quite different. These years were also packed with women’s drama and – in the tales of conflicted maternity and monstrous births – alive with female energy.

In this completely original book, acclaimed author Sarah Gristwood sheds light on a neglected dimension of English history: the impact of Tudor women on the Wars of the Roses. She examines Cecily Neville, the wife of Richard Duke of York, who was deprived of being queen when her husband died at the Battle of Wakefield; Elizabeth Woodville, a widow with several children who married Edward IV in secret and was crowned queen consort; Margaret Beaufort, mother of Henry VII, whose ambitions centred on her son and whose persuasions are likely to have lead her husband Lord Stanley, previously allied with the Yorkists, to play his part in Henry’s victory.

Until now, the lives of these women have remained little known to the general public. Sarah Gristwood tells their stories in detail for the first time. Captivating and original, this is historical writing of the most important kind.

I love British history and women’s history, so Blood Sisters is pretty much the perfect book for me!  The War of the Roses is absolutely fascinating period in history and I love learning as much as I can about it.  This has been sitting in my TBR pile for awhile because I am always tempted by shorter, faster reads.  I need to pick up this and more of the history books I have sitting around the flat.

That’s it for this week!  Have you read any of these books?  Do any look interesting to you?  Let me know!

*All book copy is courtesy of Goodreads