I received a copy of this book in exchange for an honest review.  This review will contain very, very small spoilers.

There was so much hype surrounding When Dimple Met Rishi.  It is the kind of book that YA readers have been crying out for ages, and Menon absolutely hit the nail on the head. 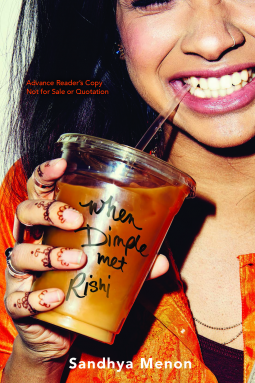 Dimple Shah has it all figured out. With graduation behind her, she’s more than ready for a break from her family, from Mamma’s inexplicable obsession with her finding the “Ideal Indian Husband.” Ugh. Dimple knows they must respect her principles on some level, though. If they truly believed she needed a husband right now, they wouldn’t have paid for her to attend a summer program for aspiring web developers…right?

Rishi Patel is a hopeless romantic. So when his parents tell him that his future wife will be attending the same summer program as him—wherein he’ll have to woo her—he’s totally on board. Because as silly as it sounds to most people in his life, Rishi wants to be arranged, believes in the power of tradition, stability, and being a part of something much bigger than himself.

The Shahs and Patels didn’t mean to start turning the wheels on this “suggested arrangement” so early in their children’s lives, but when they noticed them both gravitate toward the same summer program, they figured, Why not?

Dimple and Rishi may think they have each other figured out. But when opposites clash, love works hard to prove itself in the most unexpected ways.*

I cannot express how much I absolutely adored this book.  If there’s one book you must read this year, I urge you to run out and get a copy of When Dimple Met Rishi.  It’s smart, sweet, and represents the conflicts that kids can undergo with their parents and the cultural clash between generations.  I cannot speak to the accuracy of both Dimple and Rishi’s Indian backgrounds, home life, and the expectations that go with, but I can relate to the feelings of helplessness surrounding life after high school and one’s personal wants versus what is best for their future.

I went into this book fully expecting to relate most to Dimple, the whip-smart coding feminist who rebels against her mother’s desires for her to find the Ideal Indian Husband, but I came out of it relating most to Rishi.  Rishi is the hopeless romantic who loves hearing tales of how his parents met, the oldest son in his family, and is eager to follow the path his parents lay out for him.  I wont spoil the what Rishi wrestles with throughout the book, but his struggle really spoke to me.  I see a lot of myself in him, and I can guarantee that many readers, particularly readers around his age, will feel the same.

The relationship that develops between Dimple and Rishi over their summer program is absolutely delightful.  They are complete opposites, but learn to respect each other as they get to know each other.  This book is more character driven than plot drive, so the summer program does take a backseat to their developing relationship, however this is not a bad thing.  As a friendship emerges, they learn so much about each other and themselves.

I’ve already rambled on enough.  I don’t want to say too much, except go get this book.  This was an unexpected delight that will give you warm, fuzzy feelings.  It is a frontrunner for favorite book of 2017.

Have you read When Dimple Met Rishi?  Have you been following the hype surrounding this book?  Let me know!