The Wrath and the Dawn by Renée Ahdieh

I saw this book and fell in love with its gorgeous cover.  As someone looking to fill the diversity gap in her fantasy reading, The Wrath and the Dawn was the perfect departure from the ordinary. 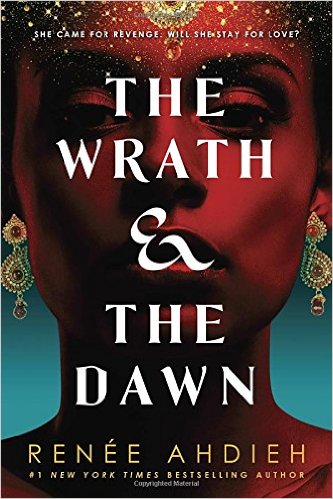 In a land ruled by a murderous boy-king, each dawn brings heartache to a new family. Khalid, the eighteen-year-old Caliph of Khorasan, is a monster. Each night he takes a new bride only to have a silk cord wrapped around her throat come morning. When sixteen-year-old Shahrzad’s dearest friend falls victim to Khalid, Shahrzad vows vengeance and volunteers to be his next bride. Shahrzad is determined not only to stay alive, but to end the caliph’s reign of terror once and for all.

Night after night, Shahrzad beguiles Khalid, weaving stories that enchant, ensuring her survival, though she knows each dawn could be her last. But something she never expected begins to happen: Khalid is nothing like what she’d imagined him to be. This monster is a boy with a tormented heart. Incredibly, Shahrzad finds herself falling in love. How is this possible? It’s an unforgivable betrayal. Still, Shahrzad has come to understand all is not as it seems in this palace of marble and stone. She resolves to uncover whatever secrets lurk and, despite her love, be ready to take Khalid’s life as retribution for the many lives he’s stolen. Can their love survive this world of stories and secrets?

Inspired by A Thousand and One Nights, The Wrath and the Dawn is a sumptuous and enthralling read from beginning to end.*

Ahdeih builds a lush, gorgeous world for her character that is much like our own, but with a touch of fantasy.  The setting is like a breath of fresh air in a genre that is dominated by medieval European settings.  At its core, The Wrath and the Dawn is a retelling of the famous One Thousand and One Nights, in which Sharazad (sound familiar?) volunteers to marry the sultan Sharyaer, who marries a new woman each day and has her executed the following morning.  Sharazad enchants her husband with a piece of a story each evening – his intrigue in her tale keeps her alive.  That’s the main plot of The Wrath and the Dawn as well, but Ahdeih spins it into much more than that.  She goes deep into the flawed and complex characters who bring the story to life.

The characters, particularly Sharhzad and Khalid, were well-written.  Sharhzad is a great example of how to do a stubborn and angry female character well.  Often I find that these types of characters rub me the wrong way because they shriek and scream until they get their way and will not listen to the advice of anyone else.  Sharhzad is a young woman who knows her own mind, but cares deeply for the ones she loves.  Her entire motivation in the novel is to avenge her best friend’s death and the deaths of Khalid’s previous wives – she’s taking a huge risk to do so.  She’s smart and sympathetic and admirable. However, what I’m most impressed with is her handling of Khalid’s character.  I wasn’t sure how she would make the leap from ‘murderer of the best friend and numerous other women’ to romantic hero, but she made it work.  He is a good counterbalance to Sharhzad’s firey personality and stubbornness.  I will say that now that I’m a few weeks away from finishing this book, he is a little more forgettable of a character and definitely lives in Sharhzad’s shadow.

There’s a blend of realism and fantasy that is done is such a way that it feels like The Wrath and the Dawn could have taken place long ago in our own world.  The book reads like one of Sharhzad’s stories – it is rich, colourful, and full of wonder.  I cannot wait to get my hands on the second book!

Have you read The Wrath and the Dawn?  What did you think?  Let me know!

13 thoughts on “Review: The Wrath and the Dawn”