This is a new series I’m going to try out aimed at people who are looking for a recommendation, a specific type of book, or just want something completely new. Let me know what you think!

The Mistresses of Cliveden: Three Centuries of Scandal, Power and Intrigue in an English Stately Home by Natalie Livingstone 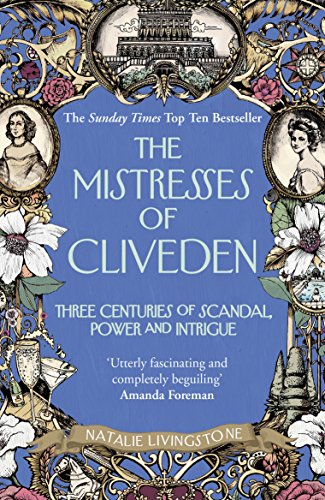 One of my favorite books of 2016, this is the book that turned me into a history reader.  I had often found that nonfiction history was difficult to read or just not aimed at a general consumer like myself.  However, The Mistresses of Cliveden changed all of that.

Cliveden is a stunning mansion/estate in England that is currently run as a hotel.  There have been three houses on the estate — the 1666 and and 1824 houses burned down and the surviving house was built in 1849.  Cliveden has been the home of some of Britain’s most impressive women.  The Mistresses of Cliveden chronicles the lives of five of those women: Anna Maria Talbot, Countess of Shrewsbury, for whom the house was built as a gift from her lover, the Duke of Buckingham; Elizabeth Villiers, the Countess of Orkney, an intellectual woman who was reportedly the mistress of two kings; Augusta Saxe-Gotha, who was very nearly the Queen of England; Harriet Sutherland, the Duchess of Sutherland, who used her position as a society hostess to try to end American slavery; and Nancy Astor, an American who was the first woman to be elected a Member of Parliament in Britain.  Cliveden has been the site of scandal, murder, and political influence.  Through the lives of these women, the story of Cliveden and Britain itself comes to life.

The house’s current owner is the author of this book, and her passion for the estate and its rich past shine through.  It is written in an accessible style and although it looks long, it is divided into five sections, making it easy to read.  It also features full-color photographs, the best part of any history book, and includes portraits of the women it highlights.

Read this book if:

What do you think?  Have you read this book before?  Have you struggled with nonfiction in the past, particularly history?  Let me know!