A Court of Thorns and Roses by Sarah J. Maas

This review contains loads of spoilers, so don’t read on if you intend to read the book.

Also, for fans of the book, please don’t hate me!  I’d love to open up a discussion about it because I know so many people love it.  Tell me your thoughts! 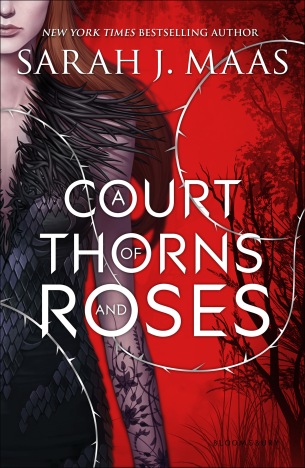 Finally, the big one!  I had never read anything by Sarah J. Maas, a huge name in current YA fantasy, so I decided to remedy this.  I picked up A Court of Thorns and Roses, the first in an ongoing series, because I love a good fairy tale retelling.

When nineteen-year-old huntress Feyre kills a wolf in the woods, a beast-like creature arrives to demand retribution for it. Dragged to a treacherous magical land she only knows about from legends, Feyre discovers that her captor is not an animal, but Tamlin—one of the lethal, immortal faeries who once ruled their world.

As she dwells on his estate, her feelings for Tamlin transform from icy hostility into a fiery passion that burns through every lie and warning she’s been told about the beautiful, dangerous world of the Fae. But an ancient, wicked shadow grows over the faerie lands, and Feyre must find a way to stop it . . . or doom Tamlin—and his world—forever.*

I have a lot of thoughts on this one.  Here’s my overall reaction: it was a quick, entertaining read that had good bits but a lot of problems.

Not too much to say here.  I like that it didn’t stick too close to close to the Beauty and the Beast story.  However, you can pick out the elements of that story and other fairy tales (lentils in the ashes, anyone?) while it managed to do its own thing.  The plot didn’t drag at all and it was well paced.  I tore through this book pretty quickly.

I quite liked Feyre.  She’s a fierce woman who is actually feminine and has feelings, something that I often find isn’t balanced well.  To me, this type of strong female character is often completely cold and/or emotionally stunted, but this just isn’t the case with Feyre.  She cares for her family because it’s the right thing to do – and there’s a deathbed promise thrown in there – but she’s resentful of their utter uselessness.  She craves recognition for the work she does, but doesn’t get it from them.  She never stops thinking of them, even though she has been whisked away to a life of luxury.  Finally, and this is a weird thing to point out, but I like the fact that she’s not the pure, virginal heroine – that trope can sometimes ick me out.  Even though it’s a small detail, it’s something that suits her and the story well.

She’s totally the best part of the book.  Even though I tend to prefer villains that fall into a grey area, I loved the deliciously evil Amarantha.  You can practically hear the thunder claps, the ravens screeching, the maniacal laughter when she shows up on the page.  I honestly think she has a good reason for her villainous motivations.  It’s such a shame that she (presumably) wont be coming back – I can’t imagine anyone surviving her grisly death.  Unfortunately, she does fall into the stupid villain trope.  Her takeover of Prythian is so underhanded and clever, yet the trials – and the riddle, the easiest riddle! – she gives Feyre don’t really match up to that level of intelligence and sneakiness.  I was disappointed by the trials.  While the last one was difficult, I felt that they just fell short of the villain Maas had built up.

Here’s where we get into the danger zone.  I really disliked almost all of the male characters in the book.  Tamlin and Rhysand are the worst – well, one is worse than the other.  I have less of a problem with Tamlin.  He’s just super passive and honestly a bit boring – except when he’s gone faerie-horny and starts biting unsuspecting young ladies, which isn’t very nice.  He’s probably the most forgettable character in the book, which is a shame because he’s the main love interest.

Now, Rhysand.  I know he’s got a lot of fans out there, so please don’t kill me.  So, I get it.  He’s the High Lord of the Night Court and is super dreamy.  But he has a lot of the same issues I had with Edward in Twilight, a book I feel glorifies an extremely creepy and abusive relationship.  So he’s dark and mysterious, sure.  But he’s also generally awful.

At their first meeting, he saves Feyre from a couple of nameless baddies.  That’s good.  He puts a severed head in the middle of a fountain on Tamlin’s land.  That’s bad.  He knows Feyre gives a false name and doesn’t lead the baddies to her.  That’s good.  He tortures and kills the girl who’s name she provides and murders her entire family.  That’s bad.  That’s a lot of push and pull here, and he’s not even a really important character at this point.

Now we get to the meat of his role in the novel.  He becomes a kind of creepy ally during Feyre’s trials.  We find out at the end that he’s been working to take down Amarantha the entire time by manipulating Feyre and Tamlin.  This is great and all, but to me doesn’t justify some of his key actions.  There are two interactions that I have a big problem with.

First: the bargain.  He offers to heal Feyre’s broken arm/fever in exchange for her living with him two weeks per month for the rest of her life, which is eventually bargained down to one week.  She refuses him again and again, so he essentially tortures her into agreeing to sell herself.  He twists her broken arm, a compound fracture mind you, until she agrees.  He’s pretty much irredeemable for me at this point.  We all know that this bargain is going to facilitate sex between the two of them – he isn’t asking her to stay so she can give interior decorating advice – so he forces her hand by torturing – torturing! – her so he can have the opportunity to sleep with her.  I’m sure it’s revealed in the following books that he’s really been in love with her the whole time and this makes it less creepy, but still – not cool.

The second incident: the sexy parties.  This is where my biggest issue with Rhysand comes into play.  So, against her will again, he has her scantily clad, covered in paint (??), parades around in front of the entire court, gets her shitfaced, and has her act in a humiliating, oversexed way in front of everyone, including Tamlin and Amarantha.  When she wakes up the mornings after, she notes that while there are smudges in the paint around her hips and such, he never violates her.  I’M sorry, but you don’t get a cookie for not raping someone even though you could.  This is not a check mark in the ‘Rhysand is a really a good guy’ column.

I can see Rhysand being set up as the third point in the Feyre-Tamlin-Rhysand love triangle in the next two books.  Honestly, unless Maas works some serious magic to undo or manipulate a number of events in A Court of Thorns and Roses, I’m not sold on either of these guys being a good enough love interest.  I’m on Team Feyre is a Strong Independent Woman Who Doesn’t Need a Man.  She should have some sort of Odd Couple sitcom with Lucien though, he’s great.

Overall, A Court of Thorns and Roses is an entertaining, but problematic, read — I can definitely see why it is so popular though.  While I’m not in a huge rush, I’ll probably read on and see what happens next for Feyre.  I’m really struggling between giving it a 2.5 or a 3.  So I’m compromising:

I know this series is one of the most beloved around, so I throw this out to everyone else who has read the book.  What did you love/hate about the book or the series?  What are your thoughts on these characters?

6 thoughts on “Review and Discussion: A Court of Thorns and Roses”