This is a spoiler-free review 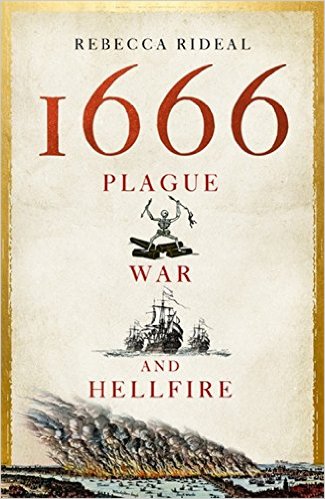 1666 was a watershed year for England. It was the year of the Great Plague; the eruption of the second Dutch War, the clash between two great powers which ultimately ended in one of the English military’s most humiliating defeats; and the Great Fire. It is a year in which no single event existed alone and which, in many ways, gave shape to the country we know today.

1666: Plague, War and Hellfire shines a light on these dramatic events to reveal an unprecedented period of terror and triumph, in a book full of extraordinary characters and teeming life.*

I had little knowledge of this year in history apart from something about plague and something about the Great Fire.  Despite this, I had no issues getting into this book.  1666 is a short book, and therefore just a survey of this fascinating time in history– you aren’t going to get any great new insight into the period.  Instead you’ll walk away with an understanding of what life was like for Londoners and the how famous figures like Isaac Newton and Samuel Pepys intersect with the highlighted events.  The author doesn’t assume you have a huge amount of prior knowledge on the topic.  Because of this, the book provides the reader with a jumping off point — you’ll discover a variety of historical events and topics to pursue further.

The book begins in the year 1665 in order to set the scene for the titular year.  The bubonic plague returned to London and the Great Plague carried on into early 1666, killing an estimated 100,000 London residents.  At the same time, the second Anglo-Dutch war began in March 1665, laying the groundwork for the conflicts seen the following year.  When 1666 is finally reached, Rideal follows the events of the year in chronological order.  Although this make a lot of sense, it just feels a bit scattered.  The jumping back and forth just starts to feel a bit muddled, particularly with the number of figures that are revisited as the year progresses.
The best part of this book is actually the last two chapters, in which she describes The Great Fire.  At the time, London was largely made up of wooden buildings that were closely packed together.  This, and a number of other issues, allowed the blaze to move swiftly and destroy a huge percentage of the city.  Rideal details not only the fire itself, but the street-by-street path it took through the city over the four days it burned.  She also describes how Londoners dealt with the aftermath of the fire, from suspicions of arson by foreign citizens to the reconstruction and housing laws that came about afterwards.  It’s just a shame that the most gripping chapters are saved for the very end; I really found this part more compelling that the rest of the book and plan to read further.
Overall, 1666 is a light survey of a fascinating period in time.  It gives a broad look at what life was like in London in that period, but doesn’t go too deep.  Reading nonfiction history can be incredibly intimidating to a newcomer — I didn’t touch it for years because I really struggled to find the right content and style — but 1666 would be a great place to start.  I would recommend this to someone who wants to dip a toe into the massive history genre.