I picked this book up after seeing it on a number of the ‘best books’ lists for 2016.  I wasn’t really sure what to think at first, but I dove straight in.

All the Birds in the Sky is a weird and wonderful combination of fantasy, science fiction, and magical realism with a touch of romance. Patricia is a witch, discovering her ability to speak to animals as a child, while Laurence is a blooming mad scientist.  The book opens when the pair are children in middle school. They are both are loners, ostracized from their school’s social circles for different reasons, but come together and a spark of friendship is ignited.  They deal with standard middle school stuff while discovering that they truly are different from their peers.  Patricia tries to unlock her magic after she speaks to a bird for the first time.  Laurence invents the two-second time machine, allowing him to jump forward in time just enough to avoid a bully’s punch to the face.  The situation is not helped by a madcap assassin/guidance councilor and some serious parental abuse.

The second half follows Patricia and Laurence as adults in San Francisco — they have drifted apart and haven’t spoken in years.  As the world starts to literally crumble, science and magic have become each other’s enemies and Patricia and Lawrence are reunited and eventually pitted against each other. Mix in a little global warming, the apocalypse, and Facebook gone mental and you have All the Birds in the Sky.

This is a strange one for me.  There were parts I really genuinely loved and other bits that I just wasn’t fond of.

I think the best way to approach this book is with an open mind.  It is a great addition to your TBR pile if you like magical realism or SSF, but it doesn’t really slot into those genres easily.  I think the best takeaway from my experience reading this book is that it has been several weeks since I finished it and still cannot stop thinking about it. 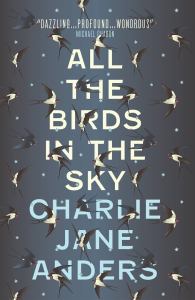