One of my favorite parts of December (other than Christmas cheer, family, friends, and all that) is the influx of ‘best books’ lists.  It’s one of the best places to get some seriously good recommendations and see what you’ve missed over the year.  It’s a little late to be getting going with one of thse lists myself, but I thought I’d give it a go.  Granted, I didn’t actually read many books that were published in 2016, but that’s neither here nor there.

a college student in the early 2000’s, the film was a huge part of my experience.  Even though I didn’t actually manage to see it until my junior year or so, Trainspotting was everywhere. I’m not kidding, the ‘choose life’ speech posters were EVERYWHERE.  So when I heard that T2 was coming out in 2017, I thought I’d give it a go.

First of all, I don’t think I’d be able to get through it without having lived in Edinburgh for a year.  It is described as ‘not an easy read for an American’ and indeed I sent a picture of the first page to my friend and he responded by asking why I didn’t get the English language edition.  With a few questions to my Scottish partner and some slower reading than usual, this book was an absolutely fantastic experience.  It has been years since I have seen the movie, but if you enjoyed the film you should absolutely give the book a shot.  Told in vignettes rather than a straightforward narrative, the story follows Renton, Sickboy, and the gang through Leith and beyond as they struggle with heroin and the horrors that addiction brings.  This is not really the sort of book I’d usually be into, but there’s just something about the vivid characters and the ridiculous humor woven in with incredible tragedy that pulls you in and doesn’t let go.  I highly, highly recommend it.

The Mistresses of Cliveden: Three Centuries of Scandal, Power and Intrigue by Natalie Livingstone

The first of my two non-fiction picks!  Cliveden House is currently a hotel in Berkshire, England, but it has previously been home to some of the most powerful and glamorous people in English history.  This book, written by the current owner of Cliveden, follows the stories of five of the house’s female tenants.  From the house’s origins as a love nest for the scandalous Anna Maria Talbot, Countess of Shrewsbery, and her lover George Villers, the Duke of Buckingham, in the 1600’s to the formidable Nancy Astor, Cliveden has been the home to mistresses of kings, queen consorts, and the country’s first elected female MP.  Livingstone weaves the stories surrounding the house’s history is an incredibly vivid and readable way.  A little on the longer side, this book glides by as you read through the centuries and is full of incredible photos and portraits of the women.

The Fishing Fleet: Husband Hunting in the Raj by Anne De Courcy

I had never read much non-fiction before this year; I always found it difficult to find something that appealed to me and was easy to read.  Mistresses of  Cliveden started my interest in nonfiction, but The Fishing Fleet really started a passion for reading history.  Compiled from letters and diaries, this book follows the lives of some of the English women who risked their lives and health to cross over to India in search of a suitable husband.  They travelled across the sea into a world of vivid color and unbearable heat that was so wildly different from Britain.  Anne De Courcy writes incredibly readable nonfiction with an apparent focus on British women’s history.  One of the reason I loved this book, and her others books that I’ve picked up since, is that she weaves the stories of these women’s lives with the brutal reality of the British-occupied India.  You don’t just get fluffy stories about happy marriages in this book — you also see the dark side of the British India that I feel is sometimes glossed over in the historical fiction I’ve read, which tends to favor the idea of it being an exotic fairy-tale land.

The Black Wolves by Kate Elliot

Early 2016 was when my three year long fantasy binge came to a close.  As one of my favorite genres, I ate up everything that came my way and may have now burnt out a little on fantasy.  However I realised at the time that I had been reading a LOT of books by male authors.  In a genre that tends to lean toward male authors this is understandable, however there are so many wonderful female writers telling their stories.  I decided that I needed to make a more conscious effort to read books by women and The Black Wolves was among the first I picked up.  Seriously, how lucky was I?

I don’t really want to say much about the plot and characters of this book because I got such incredible enjoyment from going in blind (although there is apparently a series before this set in the same world?  I had no idea).  I will say that it is just so different from anything else I’ve read in a long time.  The Asian-inspired setting, an cast of characters that is in their 50’s or older, and some seriously badass women make this rich fantasy world so fascinating and, even though I hate the word, unputdownable. 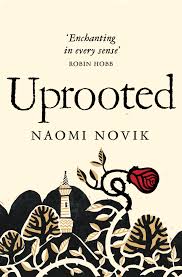 I had been seeing this book everywhere.  It seemed to hit every Twitter account and every book blog I came across.  Hell, I was even stopped in a bookshop by a staff member who saw my stack of fantasy books and ran over to recommend it.  I’m so, so glad I ended up reading this.  I have always loved fairy tales — I even took a class on them in college — but I always lamented how short they were.  Novik’s full-length novel is near perfection and scratches that fairy tale itch so perfectly.

Agnieszka lives at the edge of an enchanted wood — and not the charming kind.  The wood creeps ever further, expanding its borders and diseasing everything that comes within its power. The Dragon is a wizard who keeps the Wood at bay, but at a price.  He picks a beautiful young woman to join him in his tower.  Agnieska knows he will take her gorgeous, brave, intelligent best friend Kasia at the next choosing, but she is wrong.  What comes next is one of the most gripping fantasy books I’ve read in a long time.  I think I pushed through it in three days — all while attending classes for my masters.  I recommend this to everyone and even mailed a copy to my sister on another continent.  Read this book!

Have you read any of these?  What were the best books you read last year?  Let me know!